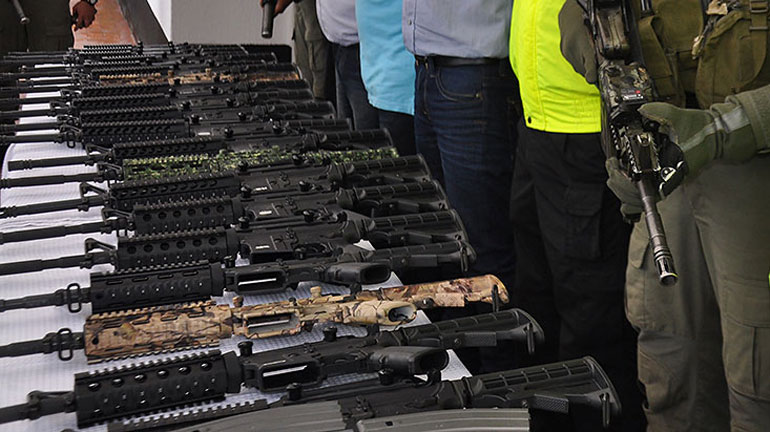 Guns bought legally in US arming narcos in Colombia: Police

Guns that have been purchased legally in the US, are shipped illegally to Colombia for use by violent drug trafficking organizations, according to the South American country’s National Police.

The police said it had intercepted a shipment of 20 M-4 assault rifles allegedly meant for drug trafficking groups active along the Pacific coast.

This area is mainly controlled by paramilitary successor group “Los Urabeños” has most control, but has also a strong presence of drug trafficking rebels like the FARC and ELN.

US Custums and Border Protection worked together with Colombia’s special investigations unit DIJIN in the investigation that showed out how guns seized from drug traffickers in Colombia had previously been purchased legally in the US, the world’s top producer of firearms.

In the case presented Thursday, the guns arrived in parts by plane where they were picked up by local gunrunners who would deliver the firearms to a weapons expert to reassemble the weapon.

According to the police, associates in the US had disassembled the M-4s and erased the serial numbers before mixing the weapons with mechanical parts meant for a front electronics company in the southern Guaviare province.

Police was able to apprehend three of the alleged drug runners at the international airport of Bogota, but did not reveal the origin of the shipment.

Previous gun busts have revealed a “Miami connection” as a major source of high-powered weaponry to the Colombian criminal underworld.

Small organizations, sometimes as small as one family, buy the guns in Florida, erase their serial numbers and ship them to South America.

While considerable, most Colombia’s illegal firearms come from gun traffickers in neighboring countries Ecuador and Venezuela, and in other cases through corrupt elements within the Colombian military.