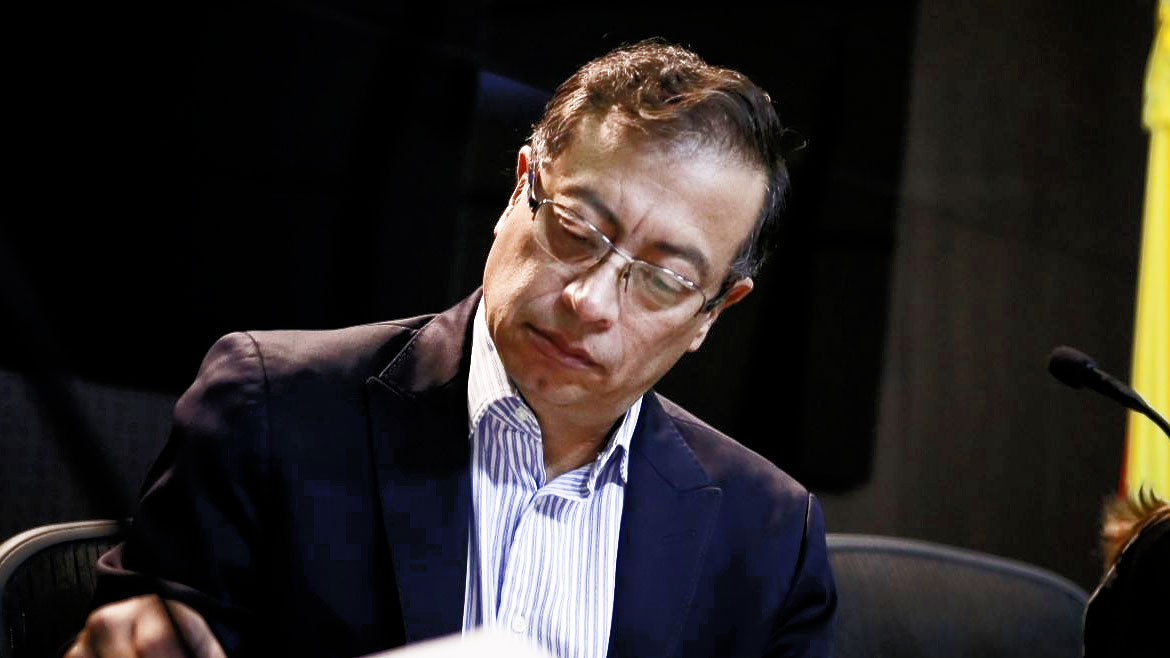 Gustavo Petro is Colombia’s president, and both feared and loathed by the country’s traditional political forces.

The progressive politician was born in Cienaga de Oro, a town in the northern Cordoba province in 1960 and moved to Zipaquira, a town just north of the capital Bogota, in the 1970s.

From local politics to the guerrillas

Petro joined the urban guerrilla movement Movimiento 19 de Abril, better known as M-19, when he was 17.

He quickly moved through the ranks and became the youngest member of the five man Central Region Leadership. According to La Silla Vacia, Petro never saw combat and is remembered by his fellow ex-guerrillas more as a thinker and political strategist than an armed revolutionary.

While active in the M-19 he held his first elected posts, first as Ombudsman of Zipaquira in 1981, then as councilor for the city in 1984.

However, in 1985 his political status was not enough to protect him when the national army came looking. He initially managed to escape by dressing as a woman, complete with dress and high heels. But shortly after, soldiers captured him and, according to Petro and his friends, planted a pistol and a grenade on him before torturing him to extract a confession.

He was to spend 18 months behind bars for possession of weapons, during which time he was transferred several times by officials concerned about his attempts to organize prisoners to demand their rights. He also became renowned for his efforts to curb drug abuse and encourage education among inmates.

When Petro emerged from prison, the M-19 was in crisis. Their disastrous assault on the Palace of Justice in Bogota had been the latest in a string of strategic catastrophes that had eroded public sympathy and created powerful enemies. With many M-19 leaders dead, Petro became a driving force in the push towards demobilization and a peace process.

Petro was instrumental in the formation of the political party Alianza Democratica M-19 (AD M-19), which replaced the guerrilla movement and participated in the 1991 assembly to rewrite Colombia’s constitution. In 1991 he also became one of the first candidates from the new party to hold office when he was elected to the House of Representatives.

After Petro lost his seat in 1994, he left Colombia after receiving death threats over his denunciations of corruption. For two years he worked in the Colombian Embassy in Belgium as a diplomatic attaché for human rights. 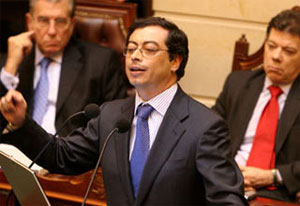 Petro returned to the House of Representatives in 2002 when he was elected as a member of the leftist movement Via Alterna. In 2005 he played a role in unifying leftist parties and politicians, including the AD M-19, to create the Democratic Pole (Polo Democratico Alternativo – PDA). Standing for the PDA, he was elected senator in 2006.

During Petro’s time in congress he became known as an ardent critic of the government and frequently engaged in verbal warfare with then President Alvaro Uribe. He was also known as a relentless campaigner against corruption and the infiltration of armed groups into politics, playing a role in uncovering and pursuing both the parapolitics and FARC-politics scandals.

Critics of Petro, including Uribe, have frequently suggested he is linked to the guerrilla insurgency, alluding to his leftist politics and guerrilla past. He has always gone to great lengths to deny any relationship with the FARC, denouncing them as “criminals” and scoffing at their leftist credentials.

Petro’s antagonistic relationship with government worsened when it became evident he was a victim of a wiretapping and surveillance campaign orchestrated by Colombia’s secret service, the DAS, who were allegedly reporting back to the presidential palace.

Petro breaks with PDA and runs for mayor

In 2010, the PDA selected Petro to run as its presidential candidate. He finished a distant fourth behind winner Juan Manuel Santos, Antanas Mockus and German Vargas with 1.3 million votes.

Throughout the campaign, cracks began to show in the relationship between Petro and the PDA leadership, who he viewed as ideologically rigid, hierarchical and clientalist. Soon after he broke away from the party and formed his own “Progressive Movement” to stand as Bogota mayor.

Petro bet to capitalize on the downfall of his old allies the Democratic Pole in the race to be mayor. The PDA has won the previous two mayoral elections in Bogota but has been discredited by the public works corruption scandal that took down currently suspended mayor Samuel Moreno.

The tactics proved effective, with Petro winning the elections with 32% of the votes against 25% for the centrist former Mayor Enrique Peñalosa.

Inspector General Alejandro Ordoñez, one of Colombia’s most conservative politicians, dismissed Petro halfway his term in a controversial decision over the handling of Bogota’s trash collection during the first year of the mayoral term.

According to the Ordoñez, Petro had violated free market principles for trying to bring the city’s monopolized trash collection under municipal control. The dismissal was internationally rejected and revoked. Ordoñez was later dismissed himself after the State Council found his reelection had been illegal.

The initiative impeded a referendum to take place that sought to impeach the mayor, whose popularity had hit rock bottom. Petro was able to use the dismissal to his advantage by portraying himself as a victim of anti-democratic forces.

Petro’s armored car came under attack while on campaign in 2018. (Image: Twitter)

His clash with Ordoñez allowed Petro to position himself as the leading anti-establishment candidate ahead of the 2018 presidential elections.

Petro additionally tried to portray himself as a reformer who would strengthen democracy and defend a peace process that had begun after a 2016 peace deal between Santos and guerrilla group FARC.

The Uribistas falsely, but successfully claimed that the former M-19 guerrilla was close to the Venezuelan government and the FARC, however.

The progressive candidate survived an assassination attempt while campaigning in Cucuta, a city on the border with Venezuela.

Petro made it to the second round, but lost to Duque amid mounting evidence of widespread election fraud.

His entry to the second round allowed Petro to return where he has performed best during his political career, the Senate, where he took a leading role in the opposition against the Uribista government. 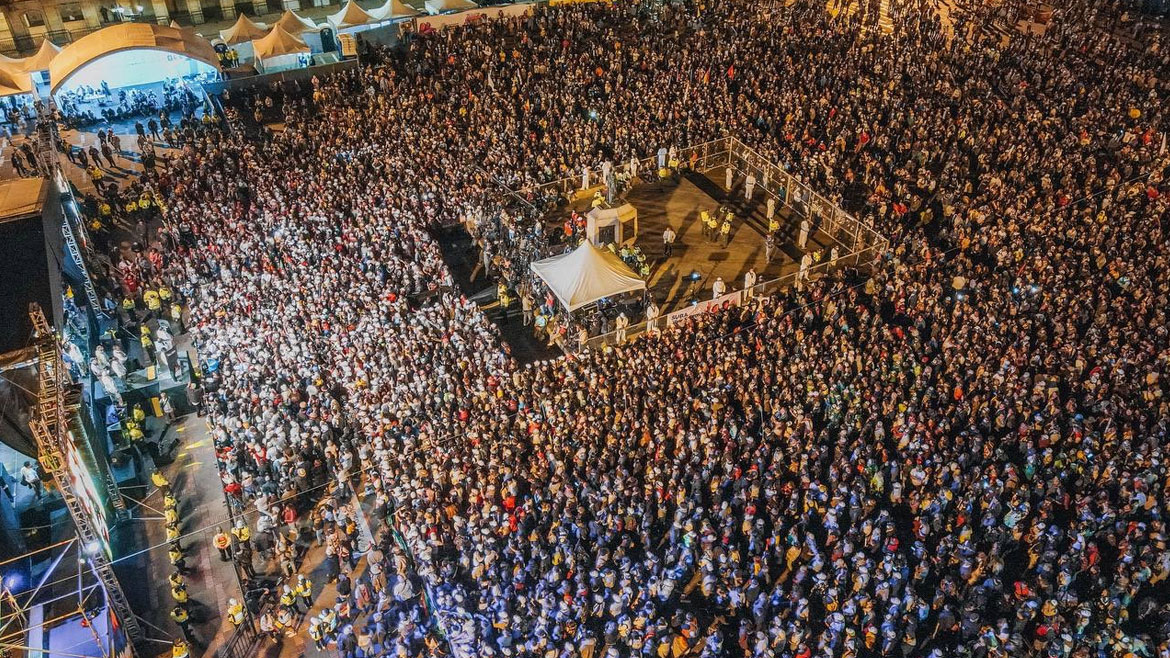 Petro’s campaign claimed more than 60,000 people took part in the opposition’s last campaign event before the first round of the 2022 elections.

Almost immediately after taking office, public support for Duque tanked as a consequence of unpopular economic policies and the president’s refusal to implement the peace deal with the FARC.

Uribe resigned from the Senate in 2019 in an attempt to evade a criminal investigation into the former president’s alleged criminal practices by the Supreme Court.

The president’s public disapproval and the growing evidence of the Uribistas’ ties to organized crime created a favorable climate for the opposition ahead of the 2019 local elections and the 2022 congressional elections.

Petro teamed up with Senators Roy Barreras and Armando Benedetti, two of Santos’  former allies, and formed the “Historic Pact” coalition in early 2021.

The coalition sought to provide a political platform for social organizations and unite social-democratic and liberal politicians who opposed the government.

Petro and his allies also gathered a team of lawyers for a legal offensive in the event of suspicions of election fraud or other irregularities that could impede the Historic Pact’s ambitions.

After nine months of intense campaigning, the Historic Pact became Colombia’s biggest political party in the congressional elections that were held in March.

Petro chose environmental activist Francia Marquez as his running mate who obtained almost 800,000 votes in the primary that was held on the same day as the congressional elections.

While the presidential hopeful and his running mate intensified their campaigning, the Historic Pact’s attorneys opened a legal offensive against politicians they accused of election fraud.

The strategy was a major success as it consolidated Petro’s position as the frontrunner in the election race while causing major unrest among allegedly corrupt establishment politicians.

The campaign was again marred by violence, however, as the progressive candidate was forced to cancel campaigning in the coffee region over an alleged assassination plot and Marquez received at least three death threats.

Petro was elected president on June 19 after defeating the allegedly corrupt Rodolfo Hernandez in the second round and took office on August 7.