The FARC’s transition from Colombia’s largest rebel group to political party is met with violent resistance and little enthusiasm, but its candidates seem determined.

For the first time since laying down weapons in 2017, the FARC will take part in local and regional elections with 16 mayoral candidates and some 60 candidates at municipal level, marking a remarkable transition.

The process is going all but smoothly; at least 52 members have been murdered so far this year, according to peace observers and their office in Bogota was attacked.

Running in Colombia’s most conservative city 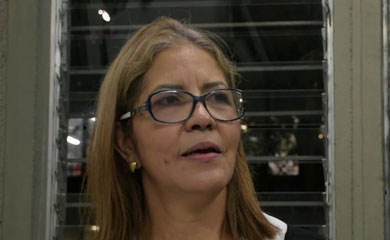 Fancy Orrego is one such candidate who is battling against the threat of violence as she runs for local counciller in Medellin, widely considered Colombia’s most conservative city.

Orrego, previously known as “Erika Montero,” fought for the FARC for 40 years before turning peace negotiator with the government in 2012 and now entering politics.

In November of last year, she narrowly escaped an assassination attempt in Medellin where resistance against the peace process has been significant.

The attempt against the life of Orrego is not unique. According to the Medellin candidate it is part of a historic pattern of deadly violence against leftist or progressive politicians, human rights defenders and community leaders.

The violence against the FARC is “not only against the party, but also against the whole social movement,” Orrego told Colombia Reports.

The FARC candidate sees the failures of President Ivan Duque’s administration to curb the attacks as a repetition of violent repression of political opposition similar to the 1980s and 1990s when the leftist UP party was virtually exterminated.

It is a message for the second time, not to say the third time that democracy in Colombia annihilates political adversaries by violent means. There is institutional resistance against taking weapons out of politics.

According to the former veteran guerrilla, “Duque is fulfilling his commitment to the political class that elected him, tearing the agreement to pieces.”

No future in war

Despite the ongoing threat to her personal security, resistance from the current administration and little chance of electoral success, Orrego said she is persistent in pursuing her political goals through the ballot box.

“It is possible that our electoral list wont reach the council, but we will carry on with the serious commitment to continue in our efforts for a more inclusive country,” the FARC candidate said in a written response to questions.

We have insisted and persisted for 53 years with the great achievement of taking arms out of politics. We are not going to give up now on working to consolidate peace as the fundamental right of everyone.

“For me, the future in the short, medium and long term is one of struggles articulated by legal means,” Orrego added.

The FARC’s candidate in Medellin appears to be adhering to the line of her party, which on Thursday reiterated that “we persist in peace” after the assassination of yet another member.