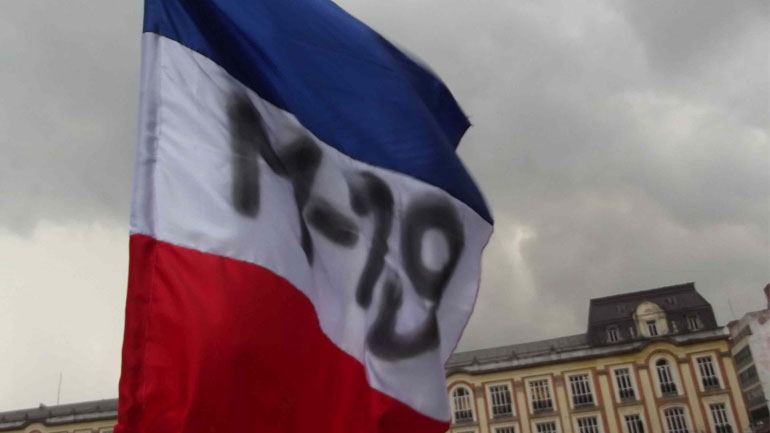 Colombia’s Prosecutor General on Monday announced an investigation into possible war crimes by surviving commanders of the M-19 guerrilla group that demobilized in 1991.

According to newspaper El Espectador, Prosecutor General Eduardo Montealegre will cross-reference cases to see if members of the M-19 leadership were involved in crimes against humanity and war crimes.

The M-19, a mainly urban guerrilla group founded in the 1970, was responsible for storming and occupying Colombia’s Palace of Justice in 1985. The initial siege and the subsequent counterattack by the military left more than a 100 people dead, including half the Supreme Court.

When the group disarmed in 199o, its members were pardoned by then-President Virgilio Barco (Liberal Party) and allowed to found the M-19 Democratic Alliance.

A number of its members like Bogota Mayor Gustavo Petro and former Governor Antonio Navarro have since become prominent leftist politicians.

However, almost 25 years after their demobilization, Montealegre wants to investigate the violent actions taken by the group while still active and revise the pardon.

“If [M-19] actions constitute war crimes and crimes against humanity, the prosecution’s office can begin investigations against members of the M-19 leadership,” Montealegre said.

The investigations comes only days after the Inter-American Court for Human Rights forced President Juan Manuel Santos to publicly ask forgiveness for the disappearance of 11 civilians and guerrillas during the traumatic Palace of Justice siege.

No member of the M-19 was ever investigated over the siege, while several military commanders are in prison for disappearing and killing the civilians.

“So let them investigate,” said Navarro, who became the M-19 Democratic Alliance leader after the assassination of the group’s supreme leader Carlos Pizarro in 1990 and is now with the centrist Green Alliance party.

According to former M-19 member Everth Bustamente, now a House Representative of the conservative Democratic Center party, said “the incoherence with which the chief prosecutor is acting is surprising.”