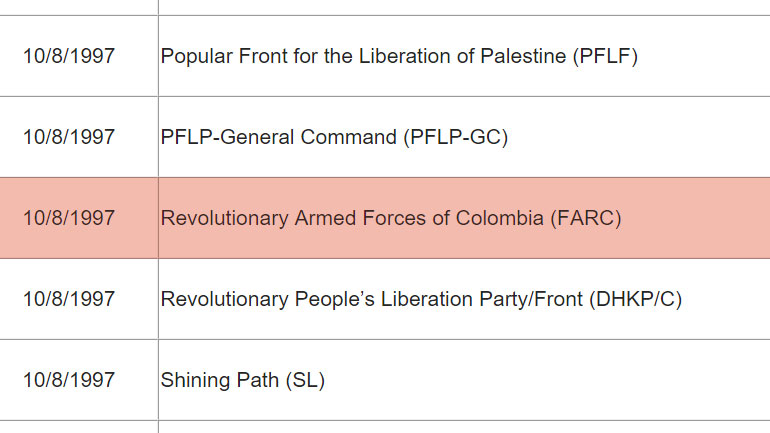 The FARC can only be removed from the United States’ Foreign Terrorism Organization list after Colombia’s largest rebel group has disarmed and stop posing a threat to US interests, the US envoy to peace talks said in an interview published Sunday.

Bernie Aronson, the Special Envoy to the talks for the administration of Barack Obama, responded in the interview with newspaper El Tiempo to a request made by President Juan Manuel Santos to remove the guerrilla organization from the terror list.

The Santos administration and the FARC are widely expected to be close to signing a deal that would end more than 50 years of armed conflict between the leftist rebel group and the State.

In an interview with The Associated Press, Santos said he would like the US to remove the FARC from its Foreign Terrorism Organization database once a peace deal is signed.

“If they sign it’s because we have a timetable for their disarmament and they have committed themselves to lay down their arms and make this transition to legal life. So I would say yes, I hope that they would be eliminated from the terror list,” Santos told AP.

However, according to Aronson, the FARC will first have to abandon their arms and organized crime, and stop imposing a risk on US interests before they could be taken off the list.

“We take the president’s request very seriously, but the same laws that apply to other groups apply to the FARC. In other word, they have to disarm, end their criminal activities and stop forming a risk for US interests.”

“When this happens, a revision process will begin to determine if the conditions [that justify a group’s designation as terrorist] no longer exist and they can be removed,” Aronson explained.

The FARC, widely expected to sign a peace agreement within months, had also asked the European Union to be removed from the European list of terrorist groups.

The US put the FARC on its terror list in 1997, after the group had begun using terrorist activity as part of their strategy to overthrow the government and had become a mayor player in the trade of illicit drugs to the US.

The rebels and the government have been negotiating a way out of the hemisphere’s longest-running conflict since 2012.