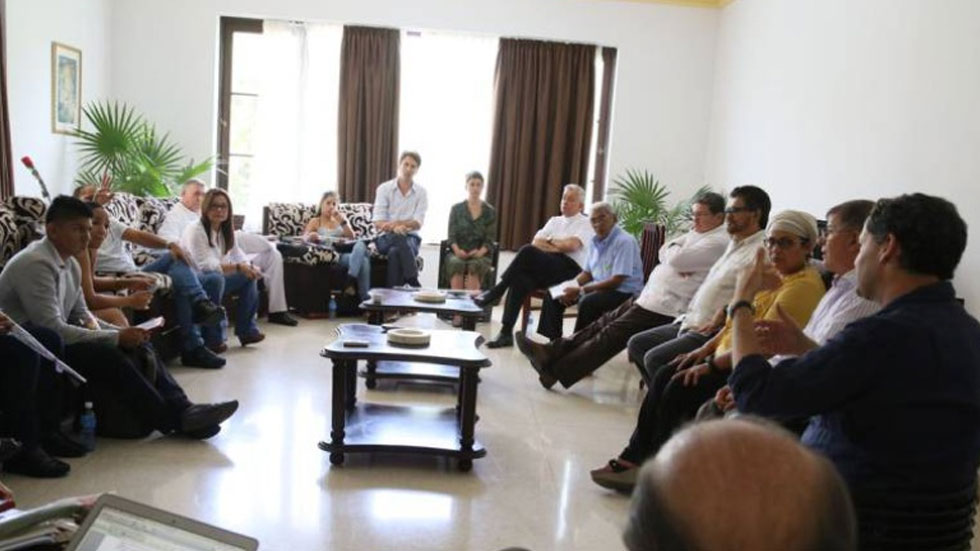 Top commanders of Colombia’s largest rebel group FARC are touring the country to meet with victims and beg forgiveness for war crimes committed by the guerrillas.

On Monday, the rebel leaders met with survivors of the of the La Chinita massacre that took place in northern Colombia in 1994.

During the massacre, members of the FARC’s 5th Front indiscriminately opened fire at attendees of a party, presuming that among the guests were demobilized members of the now-defunct EPL, a smaller guerrilla group.

Some 35 people were killed and 17 were injured in the massacre that was part of a FARC campaign to exterminate former EPL guerrillas suspected of having joined paramilitary groups violently opposing the FARC.

Twenty-two years after the fact and less than two weeks before the FARC is set to demobilize, guerrilla leaders met with survivors to beg forgiveness.

The day before, FARC leaders met with family members of 11 state deputies to beg forgiveness and commemorate the politicians who were kidnapped and executed after having been held hostage for years.

The deputies were kidnapped from the Governor’s Office in Cali, the capital of the Valle del Cauca province, in 2002.

The guerrillas held them hostages as collateral for years until 2007 when the guerrillas guarding the politicians suspected a pending military operation and executed 11 of their 12 hostages in cold blood.

“Today I feel a tranquility that I have never felt in my life. I feel an inner peace that I have needed for so long. Today, I can finally say my dad can go and rest in peace,” Sebastian Arismendi, the son of one of the victims, wrote in an emotional post on Facebook.

However, not all relatives were as gratified with the FARC’s private apology and wanted the guerrilla chiefs to also publicly ask forgiveness for the kidnapping and killing of the elected officials.

The FARC was formed in 1964 as a Marxist guerrilla group that sought to remove what they consider “the oligarchy” from Colombia’s politics.

But, more than half a century and 265,000 dead later, the guerrillas agreed to lay down their weapons and combat their political enemies through non-violent means.

The group’s 6,600 guerrilla fighters and approximately 11,000 militia members are expected to begin a 180-day demobilization process on September 26.

Massacres like that of La Chinita and the Valle politicians will be brought before a transitional justice tribunal that will seek justice for the approximately 8 million victims left by the conflict.

This process could still be stopped in its tracks during an October 2 popular vote, although pollsters deem this possibility unlikely as an increasing portion of Colombia’s electorate appears to be in favor of the deal.