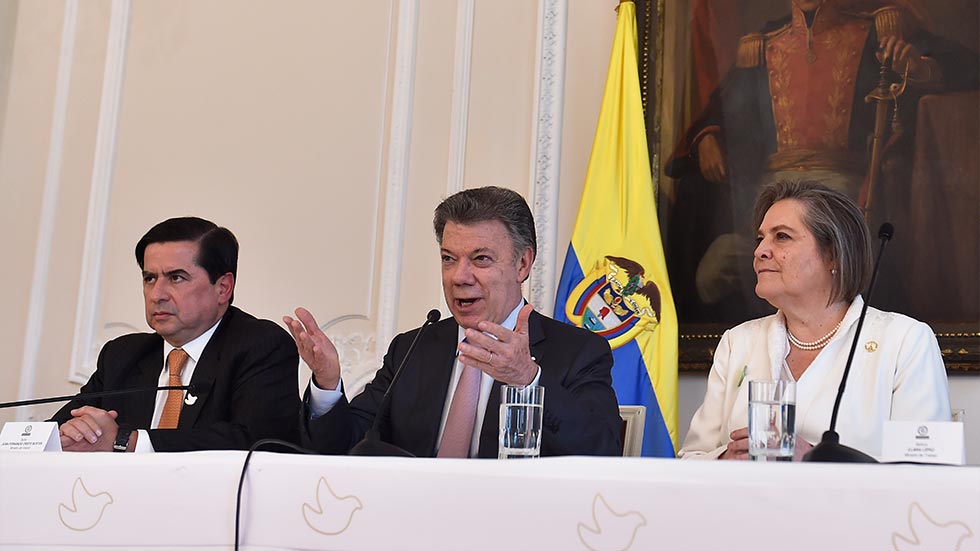 FARC to dissolve itself before Colombia votes on peace deal: Santos

Following years of peace talks that are set to culminate in a peace deal, Santos presented the road map of the final weeks of the oldest armed conflict in the hemisphere, that between the FARC and the Colombian state.

“Once we have agreed on everything, the FARC will hold their 10th conference to dissolve itself because the end of the conflict means the end of the FARC as an armed group,” Santos said after meeting with leftist opposition parties.

This rebel conference will be held with the consent of the national government and the military, who have been combating the guerrillas since 1964.

Once a peace deal is reached and the FARC begins the internal preparations for its own dissolution, the government and electoral authorities will begin the preparation of a plebiscite in which Colombians will be asked to either ratify or reject the deal.

Government and FARC come to informal, but final agreement

This process can begin before the formal signing of the peace deal, according to Santos, and will last approximately six weeks.

“The official signing will be carried out after the FARC conference … and before the plebiscite. I calculate it would take two or three weeks between finalizing the agreements and the FARC realizing its conference,” said Santos.

The president’s coalition in Congress, the leftist opposition and social organizations have all committed to campaigning in favor of the deal.

This broad peace coalition will be opposed by the Democratic Center party of former President Alvaro Uribe and a dissident sector within the Conservative Party.

According to Santos, the FARC’s demobilization, disarmament and reintegration process will begin as soon as the Colombian people have ratified the deal.

This process is scheduled to take no longer than six months.

Santos presented no “Plan B” in case the Colombian people reject the deal.

According to the Constitutional Court, a win for the “No” camp will disqualify Santos to implement the peace accord.

However, Congress will be left with the option to ignore the popular vote and proceed with the deal as agreed between the government and the guerrillas.

To prevent this, the government will begin an educational campaign on the contents of the deal, while political parties and social organizations campaign for its approval.

If successful, the peace deal will end more than 52 years of violence between the guerrillas and the state that has left more than 265,000 Colombians killed and approximately 7 million displaced.

A deal would also mark the beginning of a long peace and reconciliation process that includes a transitional justice tribunal to try alleged war criminals and far-stretching political and social reforms that seek to tackle some of the primary causes of the armed conflict.