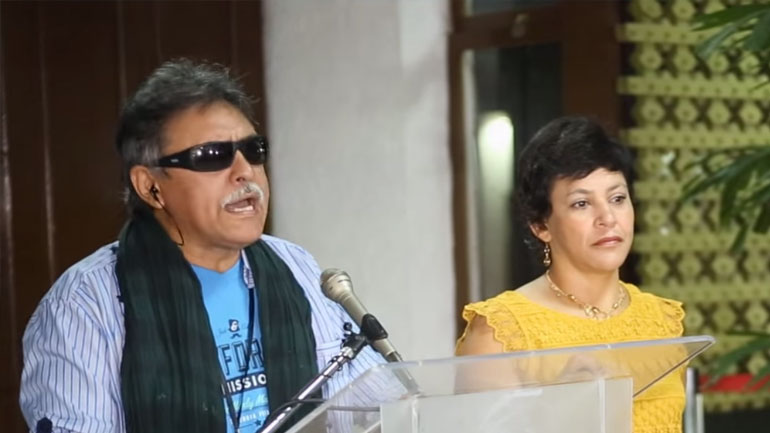 The FARC rebel group said Friday that it backed Venezuela’s government in the ongoing border dispute with neighboring Colombia and called for dialogue to overcome the tensions.

Venezuelan President Nicolas Maduro shut the border crossings last week after a shootout between smugglers and troops wounded three soldiers. He later extended the closing indefinitely and over a thousand Colombians were deported as part of an alleged crackdown on paramilitary gangs.

The FARC is currently holding peace talks with the Colombian government, a process sponsored by the Venezuelan government that is ideologically aligned with the FARC.

Rebel negotiator “Jesus Santrich” expressed the group’s support for the move, claiming that paramilitary groups operating in the border area need to be “uprooted.”

“We must respect the sovereignty of the Bolivarian Republic of Venezuela and stop the treachery, which means uprooting the paramilitarism that has created so many victims in Colombia,” he said.

Venezuela, in addition to Cuba, Chile and Norway, is acting as sponsor nation in the ongoing peace talks between the Colombian government and the FARC in an attempt to reach a peace accord to end five decades of war.

“As neighboring countries we need to unite so that peace will prevail, closing the spaces of tension and war-making, so that the rights of the people can shine through above all those who want, through economic war and all kinds of conspiracy, to destabilize the legitimate government of President Nicolas Maduro,” he said.

Maduro, whose Socialist Party is forecast to fare poorly in the Dec. 6 parliamentary election, says the crackdown is necessary to stop the Colombian right, smugglers and paramilitaries from plotting to worsen shortages and subvert him.

His critics, however, call this a smokescreen aimed at distracting from an increasingly severe economic crisis in the oil-exporting nation.