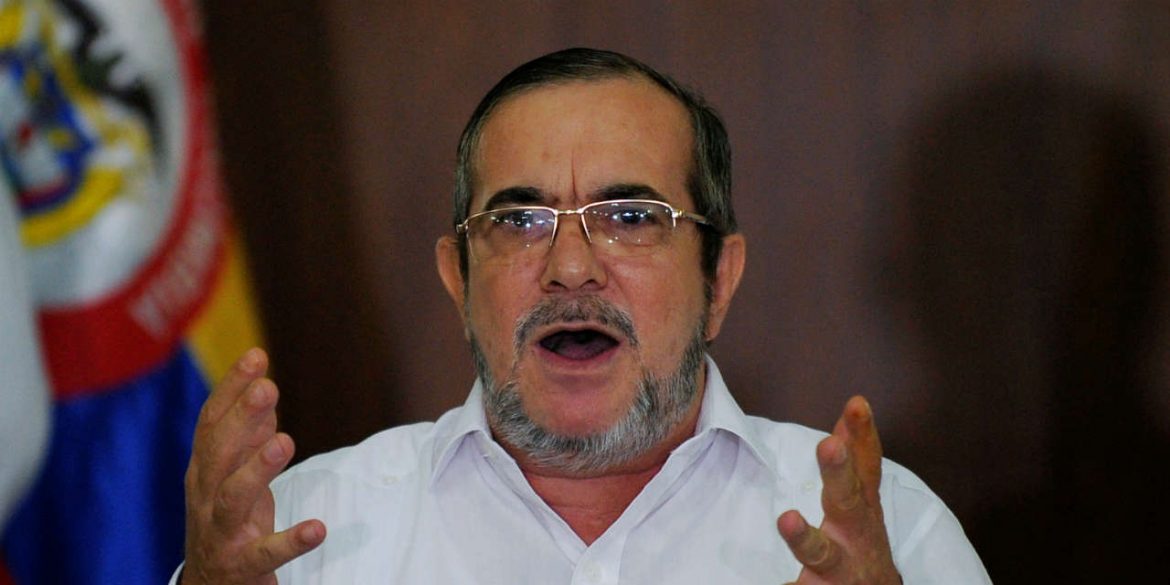 FARC president Rodrigo Londoño begged the more than 12,000 former guerrillas who disarmed in 2016 as part of a peace deal not to abandon the process after the recapture of former guerrilla leader “Jesus Santrich.”

The FARC leader, who is also known as “Timochenko,” made the urgent call after an emergency meeting with former guerrillas chiefs and United Nations peace observers.

Santrich was admitted to an intensive care unit in a Bogota hospital on Saturday after suffering a heart attack at the Prosecutor General’s Office in Bogota which detained him on Friday on a vague drug trafficking charge that had been rejected by the country’s war crimes tribunal on Wednesday.

Santrich’ attorney and doctors said Saturday they believe he could have been poisoned by prison authorities after rumors of an impending release spurred the FARC leader to attempt suicide.

Together with UN mission chief Carlos Ruiz, Londoño recognized that the peace process was going through its worst crisis yet, but urged the former guerrillas to remain loyal to the 2016 peace deal.

We find ourselves at a time when we cannot falter. It is up to us, more than ever, to strengthen the unity of our party as the guarantor of the implementation of what has been agreed. We cannot hesitate, nor doubt for a moment, in the importance of what has been achieved so far. If we were to commit the imprudence to do so, we would only succeed in sowing demoralization among all those who are accompanying us in the defense of peace. Today more than ever we must value the political struggle and the activity of the masses.

“All of us, absolutely all of us, ratified with our signature what was agreed in Havana. We knew that we were going to face forces of a fascist nature with a great deal of power and the capacity to manipulate. However, we concluded that this was the way to give continuity to the dreams that began this feat in Marquetalia 55 years ago,” Timochenko told his base.

According to the FARC leader, Friday’s suicide attempt, arrest and possible poisoning of the group’s former ideologue “sought not only to exhibit him as a war trophy, but also to humiliate all the FARC members who, in spite of adversities, continue to defend the process.”

The United Nations’ mission in Colombia announced on Friday that it would intensify peace observers’ presence at the reintegration camps of guerrillas “to monitor on the situation within the framework of its mandates” amid fears FARC guerrillas could massively abandon the process and possibly rearm.

The Mission and the Human Rights Office will continue to monitor the judicial security of the people in the reintegration process.

The UN representatives also urged that “despite the constant challenges — like the current ones — that confront the peace process it is indispensable that institutions and Colombians continue to work to preserve the achieved progress of the peace deal.”

The peace process, which in 2017 resulted in the lowest violence levels in Colombia in decades, is fiercely opposed by the far-right Democratic Center party of President Ivan Duque, who on multiple occasions has tried to amend the peace deal and limit the powers of the Special Jurisdiction for Peace (JEP).

The transitional court that on Wednesday ordered the release of the FARC’s former ideologue is loathed by radical supporters of the president’s political patron, former President Alvaro Uribe, who has been implicated in multiple war crimes.

The courts and the majority of Congress support the peace process, but elements within the country’s Prosecutor General’s Office and the military continue to oppose the transitional justice system.

The quest to seek an end to impunity for war crimes does not only affect the FARC, but also the military, powerful forces in government and the private sector, and even US state institutions.

An unknown number of FARC guerrillas, including important former commanders have lost faith in the peace process because of state failures to comply and even sabotage. Thousands of FARC members have deserted the process and have joined dissident factions that are trying to reorganize their former guerrilla group.