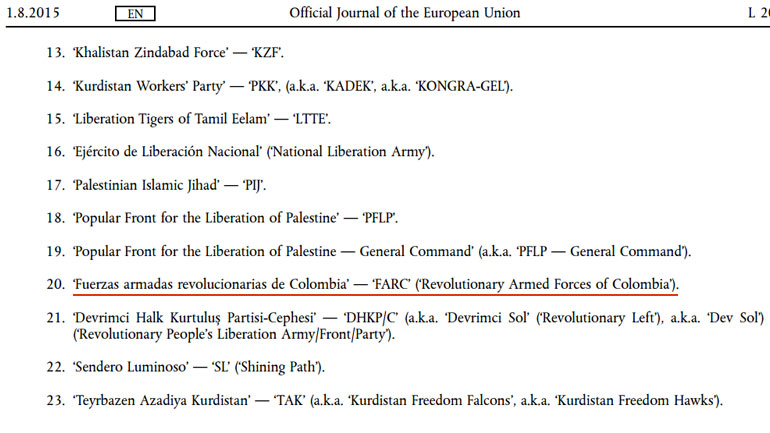 Colombia’s FARC rebels, who are set to signing peace with the government, asked the European Union on Thursday to be removed from the EU list of terrorist groups.

The guerrilla group’s chief negotiator, “Ivan Marquez,” asked Brussels to no longer determine the FARC as a terrorist organization, which it formally has been since June 2002.

Marquez and the government’s Peace Commissioner, Sergio Jaramillo, spoke before a European Parliament session through a video link that was set up between Brussels, Bogota and Havana, Cuba where peace talks are ongoing.

The FARC was deemed a terrorist group because of its use of terrorist attacks and mass violation of human rights in the group’s 51-year-long attempt to overthrow the Colombian state.

However, as the group is close to becoming a non-violent political organization, “the right and consequent thing to do is the delete the FARC from the list of terrorist organizations with the same swiftness with which we were included,” Marquez told the European lawmakers.

The guerrillas and the government of President Juan Manuel Santos have been engaged in formal peace talks since late 2012 and are expected to sign peace later this year.

The FARC’s end as official terrorist group would eliminate “an obstacle” on the road to peace and “would facilitate” demobilizing FARC members’ reintegration, the rebel negotiator claimed.

The guerrilla group is also on the United States’ Foreign Terrorist Organization list.