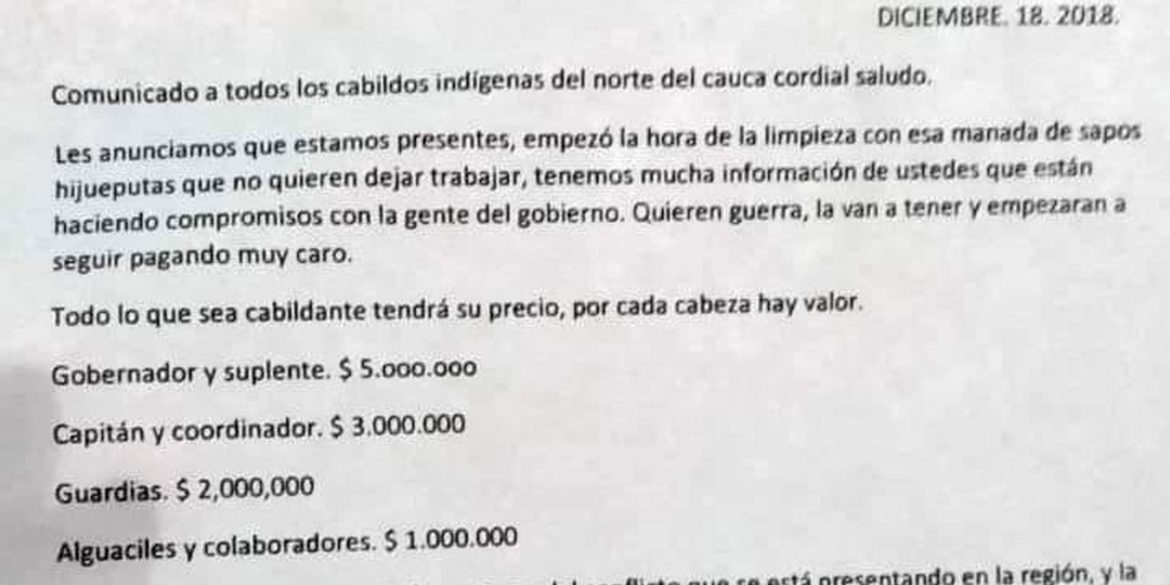 FARC dissidents on Wednesday vowed to protect indigenous leaders in the southwest of Colombia after far-right group Aguilas Negras offered generous rewards to kill them.

The rogue guerrillas’ offer to protect the leaders comes amid ongoing violence in the Cauca department where at least 30 social leaders have been assassinated so far this year, according to the Ombudsman’s Office.

The Aguilas Negras on Tuesday increased tensions in the region by offering rewards for the killing of any indigenous leader or guard in the north of the war-torn province.

The time to cleanse that herd of fucking snitches that do not allow people to work has come. We have a lot of information on those who are cooperating with those people of the government. You want war, you’re going to have it and you’re going to start paying dearly.

Two different pamphlets signed by FARC dissident groups were sent out on Wednesday in which the rogue guerrillas vowed to protect the indigenous leaders against the group they claim is financed by “Uribismo,” the allies of President Ivan Duque and his political patron, former President Alvaro Uribe.

Don’t worry about what is happening in the reserves of northern Cauca… where they have been assassinating indigenous leaders… We are willing to defend our indigenous people against all the threats they are receiving from the paramilitary groups called Aguilas Negras that are financed by Uribismo.

The FARC dissidents’ involvement further escalates tensions surrounding the indigenous organizations that reject all armed actors and have actively supported the peace process with the far-left FARC.

“We alert all human rights control and monitoring bodies, but especially our sister organizations, because it is necessary to strengthen our processes and strategies to protect life in all forms,” local indigenous organization ANIC said.

Authorities did not immediately respond to the latest threats or the indigenous’ call for support.