A Colombian Facebook community went off the internet and sent its administrator on an epic journey to deliver a computer to a young girl who had been given an almost antique machine in a failed PR stunt by the wife of a local mayor.

The community behind Internaurismo Cronico, a page dedicated to satire, reacted indignantly after Pasto First Lady Patricia Mazuera posted photos on the mayoral Facebook page giving a Pentium 4 computer to the young Paola Andrea Aza, who appeared younger than the computer she had been given.

But it wasn’t only the internet humorists who felt the antique computer was an insult to the girl; Hundreds of locals responded to the city government’s website and social media networks, expressing indignation and frustration about the apparent audacity of defrauding a little girl for political gain.

According to one angry Pasto resident, a Kinder chocolate egg contains more technology than the computer.

Particularly one photo published by the Pasto city government caused response. While posing with her new computer, the little girl fails to show enthusiasm, seemingly realizing the gift was virtually useless.

Some members of the Facebook community began to image a better future for the young Paula Andrea. 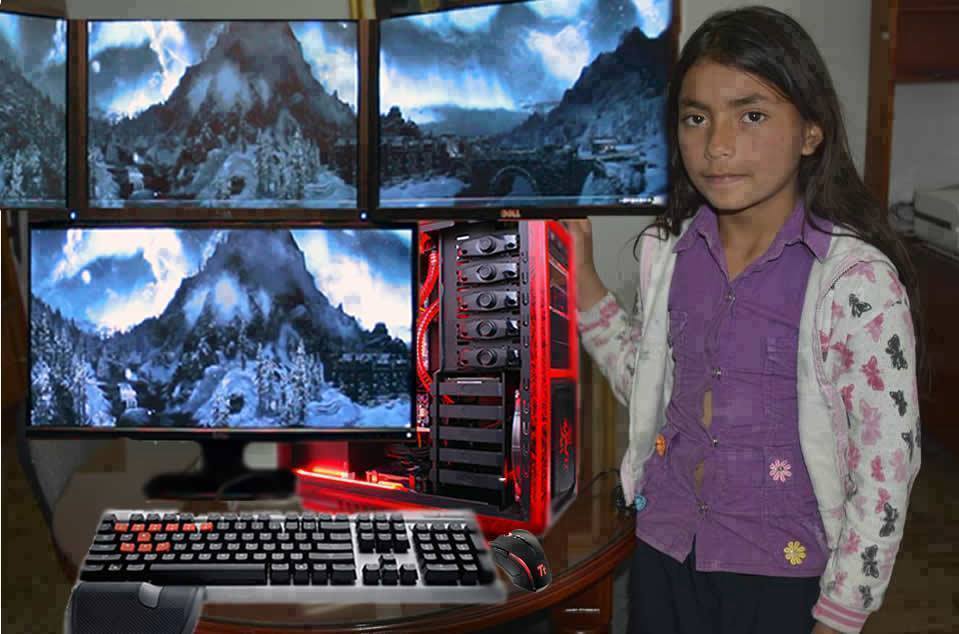 However, a virtual response was not enough for many in the online community.

Members called on the administrator of the community to use connections in the Medellin computer retail industry to obtain a “dignified” computer, travel halfway the country, locate the girl using nothing but her name and a photo ripped off the internet, AND deliver the computer to replace the “piece of junk” computer given by the mayor’s wife with the courtesy of Comllantas, a local tire warehouse.

Moderator Edwin Mejia succeeded in obtaining a sponsored computer from Medellin shopping center Monterrey and hopped on the bus to take the 400-mile journey to Pasto on Friday 6PM.

Having arrived in Pasto some 12 hours later, Mejia met up with local students Maritza Quiroz, Samara Lopez and Marcelo Tabango of the University of Pasto who had been putting up posters in the hope this would help them find the girl and hand her the new Toshiba laptop.

The Mayor’s Office was closed for the weekend and Pasto officials — having just had a local backlash over the publication — seemed reluctant to cooperate, so Edwin and the students had to locate the girl as if the internet hadn’t been invented; with a printed photo and a name.

Fortunately, the group ran into a local priest, Father Andrey, who said to know the girl. With the help of the clergy, neighbors, an Argentine community member and a borrowed megaphone, the internautists located Paola Andrea’s older sister who took the search party to the girl’s home.

And what began as a spontaneous mission earlier in the week, ended on Sunday afternoon when Paola Andrea received the brand new computer, this time putting a real smile on her face.

According to Quiroz, one of the Pasto students, Paola Andrea is likely to need a proper computer. “She told me she loves math and wants to be a doctor,” the student said.

A clearly embarrassed spokeswoman for the Pasto city government told Colombia Reports the initial donation was “unfortunate,” stressing that the local government had given poor children hundreds of computers that are up to par.

Additionally, the spokeswoman asked for increased attention for her region that is suffering from one of the country’s highest poverty rates.

Pasto is among Colombia’s five most unequal cities.