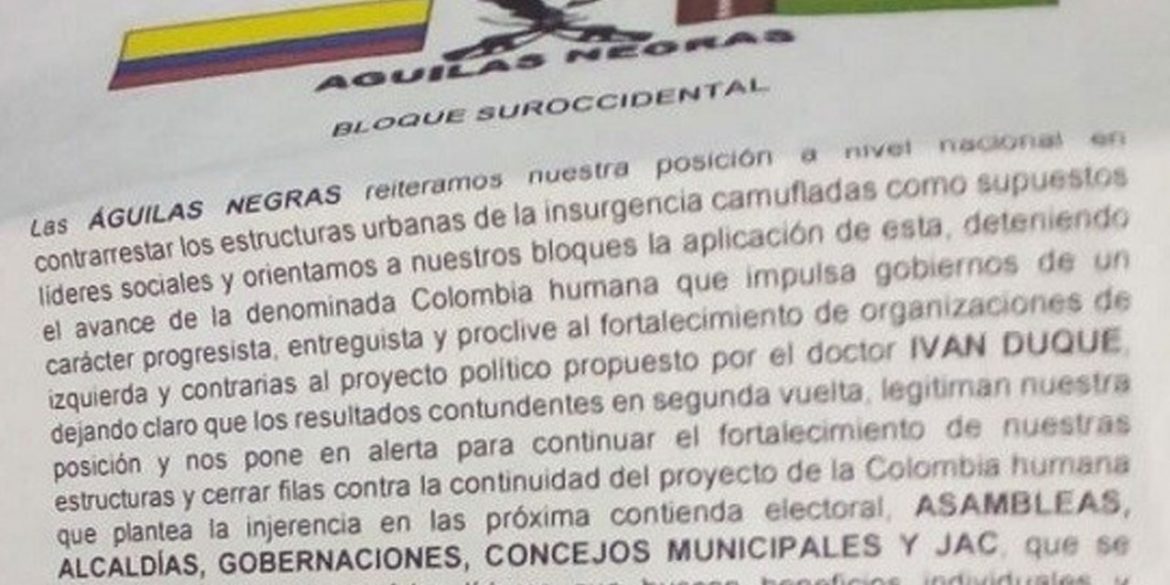 In the latest death threat and manifesto by the group’s “Southwestern Bloc,” the extremists said that it considered all political parties that do not make up the governing coalition a “military target.”

Duque’s victory in the elections held in May and June “legitimizes our position and urges us to continue and strengthen our structures,” the threat that was published by Ospina said.

The group opposed the government of former President Juan Manuel Santos, but said that any type of opposition to the new government would be considered an act of insurgency.

The Aguilas Negras said it would not tolerate any independent or opposition candidate in next year’s local elections, “putting a halt to the advance of so-called Humane Colombia,” the movement of Senator Gustavo Petro who lost to Duque in the second round of elections in June.

The Aguilas Negras reiterate our position to counter the urban insurgency structures camouflaged as supposed social leaders…, detaining the advance of what is called Humane Colombia that promotes governments of a progressive character, submitted and inclined to strengthening leftist organizations, and opposed to the political project proposed by Mr. Ivan Duque.

“We urge you to abandon your activity or find yourself on the long list of neutralized individuals, leaving the country hundreds of widows and orphans for nothing,” said the fascist collective that seeks to promote “a new management plan and direct cleansing” of democratic opposition to conservative rule.

The group’s published death list contained all political parties that do not take part in Duque’s governing coalition with the exception of the FARC, the party formed by former guerrillas as part of a peace process that began in 2016.

Analysts suspect that the group has ties with extreme-right elements within the military and intelligence agencies, and is supported by far-right political and economic forces.

Since 2016, more than 300 social leaders have been assassinated in Colombia.