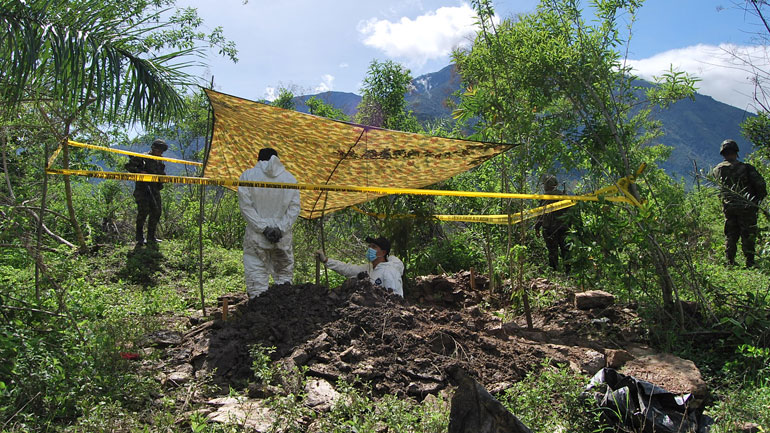 The graves were located thanks to information given to the authorities by residents in the Tolima department, the birthplace of the FARC in southwestern Colombia.

The graves, excavated in the rural area of Ataco and a small hamlet in Rioblanco contained the skeletal remains of possible members of the FARC dressed in camouflage, said the National Army, reported local newspaper Diario del Huila.

Two male skeletons were discovered both wearing military style clothing and rubber boots. They were found with their hands and feet tied. This circumstance is a specific point of investigation for the Technical Investigation Team (CTI), a division of the Prosecutor General’s Office.

The CTI want to determine whether these two male skeletons were the victims of extrajudicial executions, a result of court-martials carried out by the FARC when members of the guerrilla group commit major offences within its ranks.

The authorities have invited the residents of the area to bring forward personal reports of relatives and close friends who  disappeared in order to ascertain the identities of the bodies that were found.

More than 60,000 Colombians disappeared during conflict

Thousands of people in Colombia are feared dead after disappearing during the country’s 50-year-long armed conflict. Many of these missing people are thought to be in one of Colombia’s numerous mass graves.

The conflict which began in 1964 between the state, right-wing paramilitaries and leftist rebel groups like the FARC left over 260,000 Colombians dead and over 6 million people displaced.

The government are currently in peace talks with the FARC in the hope of resolving the conflict.