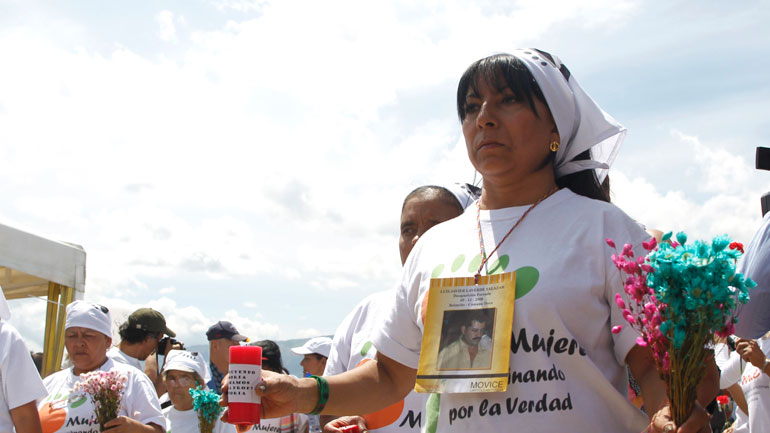 Family members of some of the possible 300 victims thought to be buried in a mass grave in Medellin, gathered near the grave site on Monday before authorities begin the task of searching for the remains.

Prosecutors have billed the landfill in the Comuna 13 slum as the largest urban mass grave in the world.

Some of the victims are thought to have been buried here as far back as 2002, bringing back strong emotions for the family members of victims who are still looking for closure more than a decade after their loved ones went missing.

“There are mixed feeling because there is joy because this is at least a drop of hope in a sea of 13 years of impunity, but it is also painful because it stirs up a lot of things and a lot of feelings to know that we could find them and you also have to deal with the possibility that nothing could be found in this area. But at least we can now start the excavation process and start to open this process for real,” said Alejandra Balvin whose loved one has been missing for 13 years.

The victims thought to be buried here went missing as a result of Colombia’s 51-year-long internal conflict.

The eyewitness statements of several former paramilitary warlords, who demobilized and are now in prison, say that the corpses of around 300 people were dumped in the landfill in the upper reaches of a mountain slum in western Medellin from 2002 onwards.

Government officials, though, estimate 90 bodies are hidden in a 24,000 meter-squared landfill, some of whom may have been victims of state security forces.

Interior Minister Juan Fernando Cristo said the recovery of the victims’ bodies could help some of the family members of victims heal.

“Here, from the landfill, what happened over the last 20 years of urban violence in Medellin, is the possibility to symbolically repair; to meet the rights of so many victims here in Medellin that which we want to replicate in all of Colombia,” Cristo said.

The excavation of the landfill will be a major undertaking as workers here will have to dig deep into the landfill as they scour for the missing bodies.

“This week we are going to do everything pertinent for the arrangement because the land moves, because it is a landfill. And in the coming days we will start to go down the 20,000 meters of earth, which is what we need to go down, to find the bodies we are looking for,” prosecutor Gustavo Duque said.

The Colombian civil war pitted right-wing paramilitaries, leftist rebels and government troops in a three-way conflict that left hundreds of thousands dead and over a million people displaced.