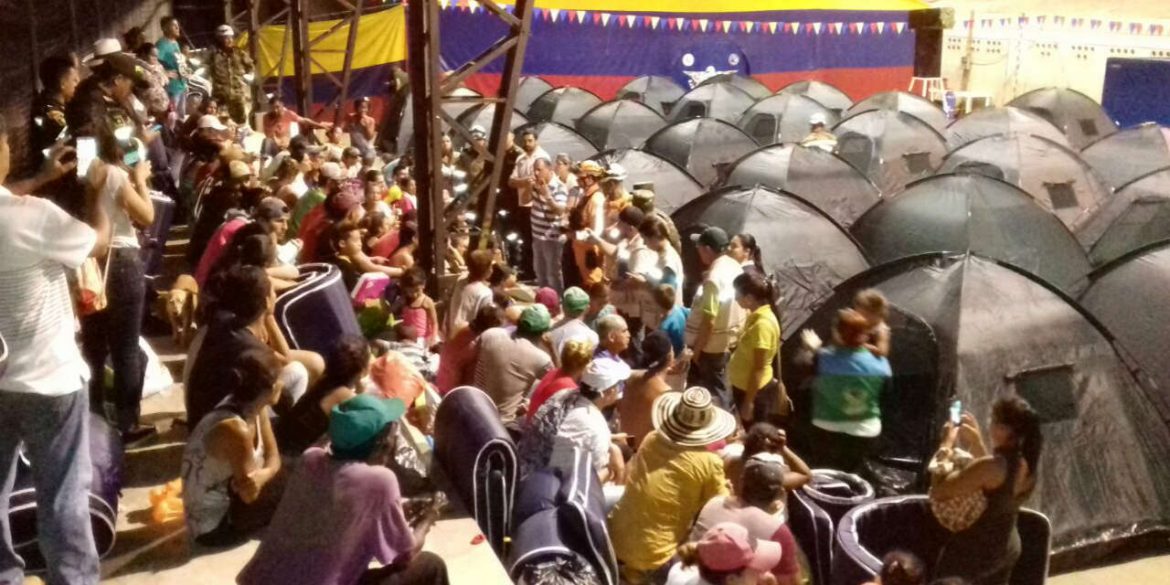 Locals from Puerto Valdivia are given shelter in a nearby sports facility. (Image: Telemedellin)
News

The director of disgraced energy company EPM told Colombian media on Thursday that the country’s largest hydroelectric dam could burst.

Jorge Londoño conceded that it is “difficult to answer if the Hidroituango (dam) will be saved,” a stark assessment that if true, could cause an unprecedented amount of damage to the environment, the nation’s economy and ultimately lives.

The company and regional authorities called in the help of the national government on Wednesday after losing control over the dam that was only months from being inaugurated.

If authorities and EPM can’t figure out a way to prevent the dam’s walls bursting and flooding into the Cauca river, “an avalanche of huge proportions” may take place.

According to one expert, “if the dam is irreparably damaged and the Cauca (river) floods, Armero’s tragedy would pale in comparison,” referring to the 1985 volcanic disaster that killed 23,000 Colombians.

Project workers had been advancing to raise dam walls to the “fundamental” elevation of 410 meters, yet due to the impending risks of the dam rupturing, workers have been evacuated, leaving the wall at an elevation of 403 metres.

Under this worst-case scenario, 12 municipalities downstream in the Antioquia, Cordoba, Sucre and Bolivar provinces could be flooded by the Cauca river. More than 100,000 people that live in the risk area could be affected.

Medellin Mayor Federico Gutierrez said that in such an event, floods would reach municipalities such as Nechi in 18 hours, Caucasia in 10, Caceres in five and Puerto Valdivia in just an hour.

Evacuation efforts have already begun in the municipalities that could be flooded in the event the dam breaks.

“Everyone is worried, especially since no one knows what will happen,” Ituango-based journalist Nicolas Bedoya told Colombia Reports.

“No one knows when road access will open up again and no one knows if the dam will be hiring again knowing that hundreds of families depend on the project,” said Bedoya.

National authorities are scurrying to create contingency plans on preventing a disaster and evacuating residents while EPM has sought international advice on how to deal with the situation.

Rating company Fitch alerted investors last week that the problems at EPM’s billion-dollar project could affect its financial stability for years. The rating agency’s negative observation was issued before the company was forced to abandon the project as a whole.

The Negative Observation of the rating reflects a higher probability of delays in the construction of the Ituango hydroelectric project, which will likely increase the pressure on the capital structure of EPM Inversiones in a sustained manner. In addition, logistical and environmental aspects have increased the uncertainty surrounding the possibility of significant cost overruns and associated liabilities.

As the national authorities try to respond to the emergency, tens of thousands of Colombians live in fear that they could lose their homes on both sides of the dam.