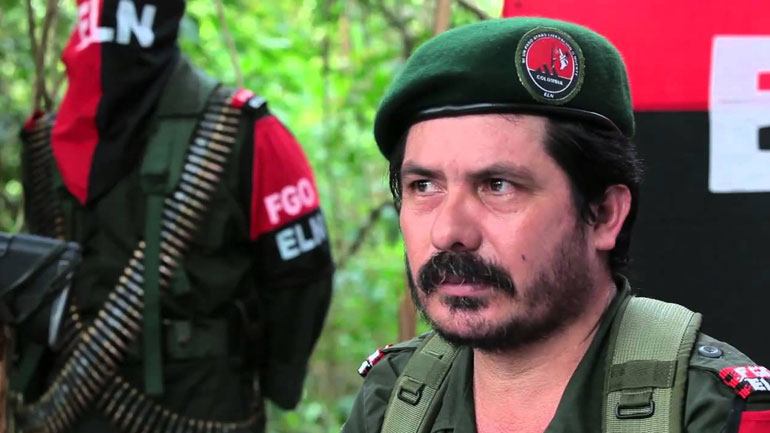 Colombia’s second largest rebel group, the ELN, elected a new member to its top political body. The latest top-ranking member of the guerrillas is a hardened fighter with a bloody criminal record.

The rebel leader is accused by authorities of commanding the bloodiest front of Colombia’s second-largest guerrilla organization in the northern department of Arauca.

During the fifth conference of the ELN, held in January — but only recently made public, Pablito was elected to the highest political body of the ELN, the Central Command (COCE), with which the Colombian government is holding exploratory talks for a possible peace process.

Pablito’s history with the ELN

In 2000, Pablito became commander of the ELN’s Eastern Front, as well as a member of the group’s central command, the National Directorate. He served as a liaison between the COCE and ELN’s subversive fronts.

Pablito headed his ELN operations in Apure, Venezuela until 2008, when he was captured by Colombian authorities in Bogota while using the alias Carlos Marín Guarín.

His arrest was described as one of the biggest blows to the ELN, as Pablito was one of the most active members and maintained the ELN’s presence in Arauca, one of the emblematic areas of the rebel group on the Venezuelan border.

“This was the most belligerent leader within the ELN, he was like the ‘Acacio Negro’ and ‘Mono Jojoy’ [of the FARC] together,” the then minister, now president, Juan Manuel Santos said at the time.

Alas, Pablito only remained behind bars for a feeble nine months before breaking free with the help of his comrades. In 2009, Pablito escaped from prison in Arauca in a spectacular rescue mission carried out by fellow ELN guerrillas.

After his prison-break, he resumed his power in the Eastern war front, had more armed men and maintained a presence in Arauca, Boyacá and Casanare. Under his new title, Pablito now retains greater power than ever before.

Pablito and the peace talks

Analysts polled by El Tiempo say the promotion of the guerrilla to the head of ELN Central Command could lead to Pablito sitting at an eventual negotiation table with the government.

Former Prosecutor General Jaime Bernal, who has been mediating peace discussions with the ELN, said the presence of Pablito in COCE would be key in any negotiation process, as the guerrilla has a long and varied history among the ranks and members of the guerrillas.

“That a person like Pablito is in control of the COCE will allow the negotiation of key issues for the integral members of the rebel group like, for example, the conditions of transitional justice,” described Cuellar.

By the same token, Camilo Gonzalez, director of the Institute of Studies for Development and Peace, said Pablito’s new assignment could also positively result in the eventual inclusion of the ELN military wing in peace negotiations.

“It’s positive that those with weight in the [ELN] military are in discussions of justice and it is desirable that those who have led the armed struggle are also leading the negotiations. That is what has strengthened the bargaining in Havana,” Gonzalez expressed.

Gonzalez added that although the ELN maintains unity in its ranks, it has traditionally given a lot of autonomy to its headmen, and that this move would ensure that the most impactful and powerful members of the rebel group also enter the decision-making of the organization.