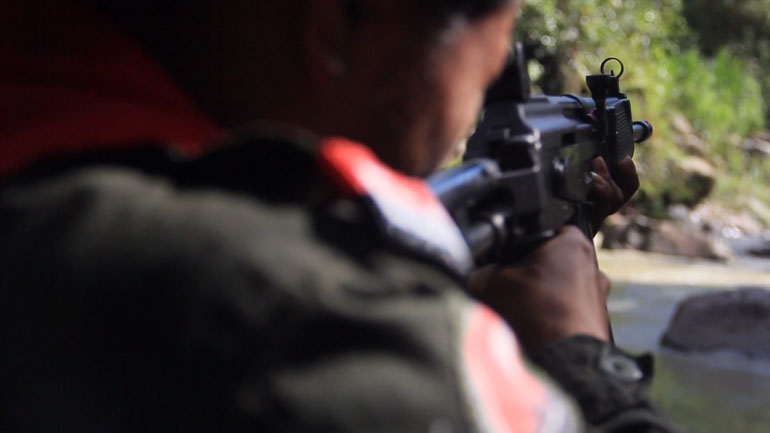 Colombia’s second largest guerrilla group, the ELN, captured a Colombian policeman on the same day the guerrillas released a captured soldier, whose release had become a condition for peace talks with the government.

Patrolman Hector German Perez disappeared early Sunday morning while riding his motorbicycle to Tiquisio, a small town on the south of the ELN-controlled south of the Bolivar province.

Locals have told press that the policeman was pulled over by armed men, removed from the road, and is now allegedly held hostage by the ELN, with an estimated 2,000 members the second largest rebel group after the FARC.

According to National Police commander Jorge Hernando Nieto, the policeman was off duty, which according to international humanitarian law would make his capture a kidnapping if the patrolman was dressed as a civilian.

“We are carrying out the investigations to determine if this is a kidnapping,” Nieto told press.

Another spoke in the peace wheel

The capture of the policeman couldn’t have come at a worse time for the prospect of peace talks with the ELN.

The group and the government have been holding preliminary talks since before June 2014, but since December last year no progress whatsoever has been reported.

President Juan Manuel Santos publicly made the release of soldier Jair de Jesus Villar and a civilian a condition to formalize talks.

However, around the same time the ELN complied to Santos’ condition to release Villar, Perez was taken captive.

Finding agreement between the extreme-left ELN and the government has already been complicated by slowly progressing peace talks with the FARC, by far the country’s largest rebel group.

According to both governmental and non-governmental observers, the ELN has been incorporating dissident FARC fighters, allowing it to expand its territory outside its traditional hotspots in the northeastern Arauca and Norte de Santander provinces, the western Nariño and Choco provinces and the south of Bolivar, where the policeman was captured.

Santos, whose patience seems to be wearing thin, told the ELN on Saturday to “jump on the peace bandwagon” or “their destiny will be the grave or prison.”

The president put his political legacy on the line to achieve peace with both groups, but is suffering abysmal approval ratings and strong skepticism about his ability to achieve peace in a country where the majority of the population has only known war.

According to both Santos and independent observers, the ELN has increased its attacks to strengthen their negotiation position while damaging the public support of the government.

The group, founded in 1964 amid a Marxist fervor in Latin America following the Cuban revolution, has been on the United States’ and the European Union’s terror lists after the group began kidnapping civilians and holding soldiers hostage for political and military leverage.