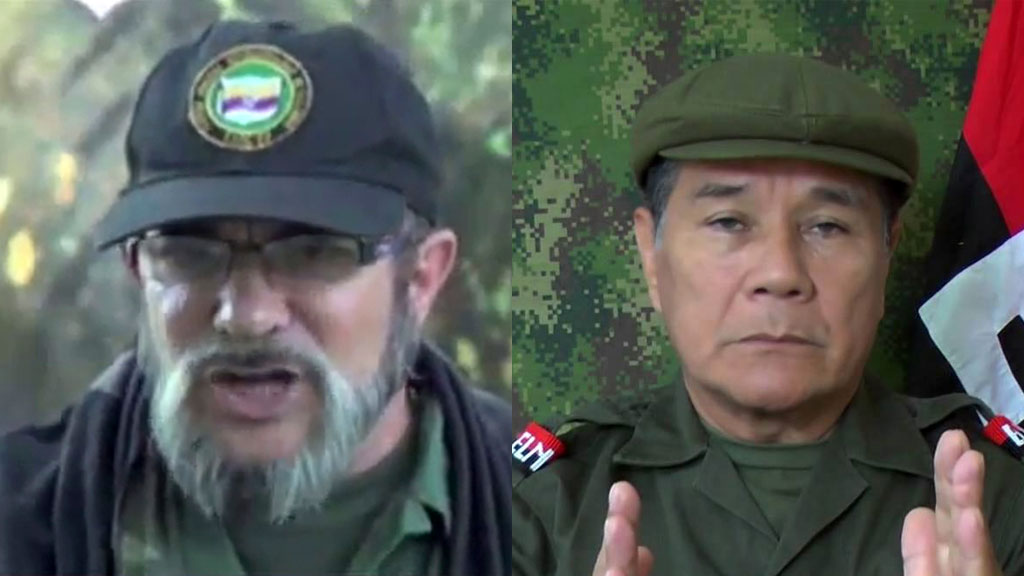 ELN and FARC leaders meet in Cuba at Santos’ request

The top bosses of Colombia’s two largest rebel groups, the ELN and the FARC, have met in Cuba at the end of April, President Juan Manuel Santos announced.

The reunion had the purpose that “Gabino” would personally recognize the advances that the FARC has made in the peace process and decide if the ELN should also enter formal negotiation with the government.

“In my capacity as head of state and government, I facilitated with the support of the guarantor countries and companions the conditions for this meeting to be held, with the sole purpose of course to make progress in the search for the end of the conflict,” said President Juan Manuel Santos in a statement from the presidential palace on Monday.

“My duty as head of state is to seek peace,” Santos added.

Head of the government delegation in Havana Humberto de la Calle issued a statement on Tuesday clarifying the President’s intentions.

“In order to achieve the end of the conflict in a comprehensive manner, the Head of State is convinced that incorporating the ELN in the process is in the best interest of Colombian society,” the chief negotiator said.

“Neither alias Timochenko nor alias Gabino participated at the table of negotiations,” de la Calle affirmed.

It seems that the president obviated the prosecution’s stance on the matter, who since last year said it would not lift the arrest warrants against “Timochenko” to allow for such a meeting to take place.

“We have heard very critical voices about the presence of “Timochenko” in Havana,” said Deputy Prosecutor General Jorge Perdomo.

“The prosecution will not participate in this game of political interests, as apparently here is a highly political discussion,” Perdomo added.

Santos clarified on Monday that his actions in the pursuit of peace “have been and will be in the framework of our Constitution and laws.”

Since January 2014, the ELN and the Santos administration have attempted to engage in peace negotiations, to complement those ongoing in Havana with Colombia’s largest rebel group FARC since November 2012.

The ELN has continuously argued that a lack of adequate conditions exists for the group to initiate a formal discussion with the government.

The small rebel group, unlike the FARC – who agreed to negotiate a five-point agenda with the government – desires a broader agenda and would be resistant to limit it.

Following the meeting between “Gabino” and the high FARC leader in Havana, there was a new reunion between delegates of the ELN and the government in exploratory dialogues, and the progress was minimal, according to Colombian news source El Tiempo.

The ELN was formed in 1964 based on Liberation theology, a radically leftist interpretation of the Christian faith that calls on worshipers to fight injustice. The rebel group has since — like the FARC — tried to overthrow the Colombian government it describes as an oligarchy.

The ELN is mostly active in the western Choco state and in the northeastern Catatumbo region. Exploratory talks with the government were announced last June, five days before the president’s re-election, but have never been formalized.