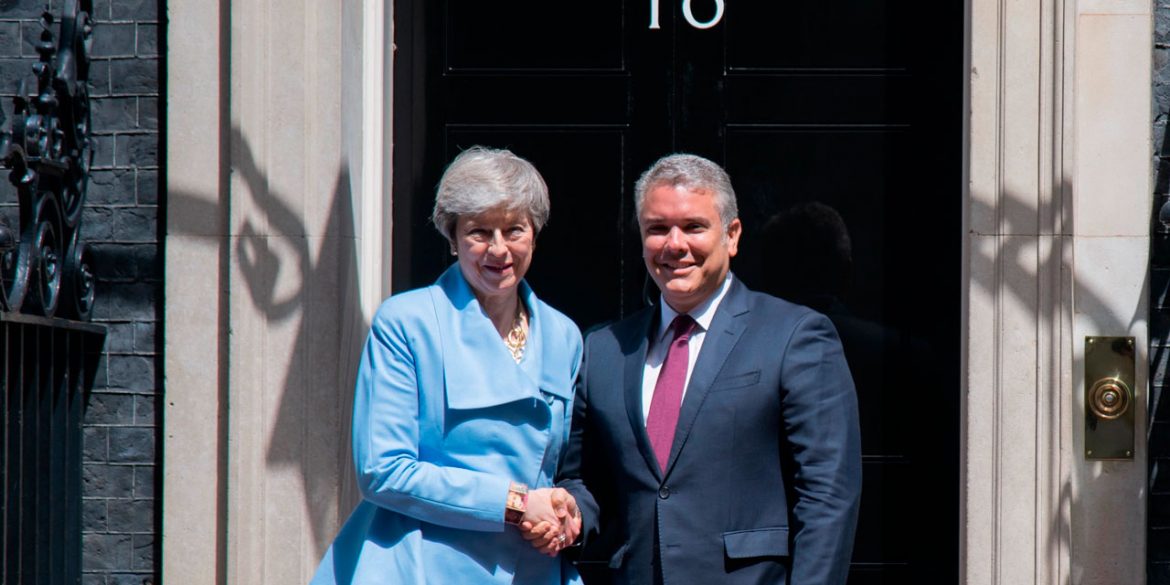 Duque welcomed by May and protesters in London

Colombia’s President Ivan Duque met with British Prime Minister Theresa May on Monday after being confronted by fierce protests over ongoing violence in his home country.

A few dozen protesters shouted “murderer” at Duque while he was on his way to 10 Downing Street for his 20-minute meeting with Britain’s outgoing PM.

At the end of the meeting, Duque told press that May had expressed her support for the reintegration of FARC guerrillas who demobilized and disarmed in 2017 as part of a peace process.

The president did not address concerns about his government’s failures to comply with the peace deal his far-right Democratic Center party fiercely opposes.

May did not immediately release a statement about the “very interesting and constructive” conversation Duque said they had.

The Colombian president will stay in Britain until Wednesday and on Tuesday will meet with Minister of State for Europe and the Americas, Sir Alan Duncan, who has expressed his concern about Duque’s opposition to the war crimes tribunal and failures in the peace process.

Eighty British members of parliament from several parties tabled a motion in March in which they encouraged the Colombian government to take “further steps to be taken to ensure the full and effective implementation” of the 2016 peace deal.

The lawmakers also called on Duque and ELN guerrillas to resume talks “and calls on the Government to ensure that the recommendations in the UN Special Rapporteur on Human Rights Defenders’ 2019 report on the Situation of Human Rights Defenders are incorporated into, and monitored by, the UN Security Council’s Verification Mission to Colombia.”

Duque has come under increased pressure both inside Colombia and abroad about his reluctance and failures to execute the peace deal agreed by his predecessor Juan Manuel Santos.

The peace process as agreed would also broaden political participation for victims from conflict areas, strengthen rights for the opposition and social protesters, and dismantle the paramilitary structures that are suspected of the increased violence targeting community leaders and human rights defenders.