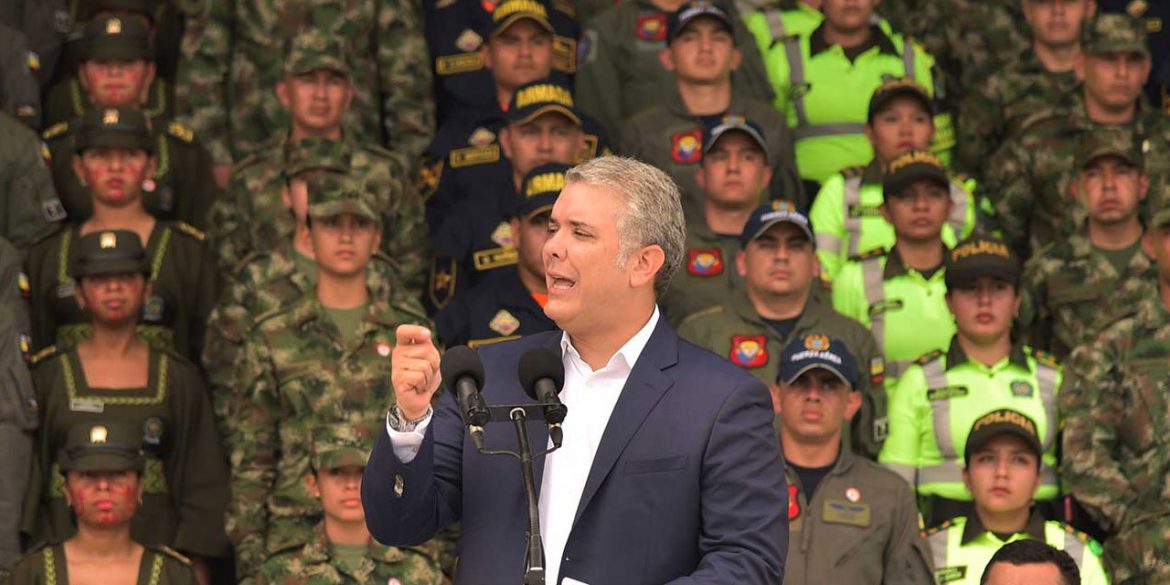 Colombia’s president Ivan Duque made insufficient progress with the implementation of a 2016 peace deal with former FARC rebels, according to Congress.

According to a report compiled by the opposition and the center right voting block that make up the majority in both houses of Congress, “57% of the standards required for the implementation of the Agreement are still pending.”

The report slammed the president, claiming that his administrations’s approach to implementing the peace deal has been contrary to his claims made abroad.

On the international stage, he ensures his commitment to the agreement. Meanwhile, in the country he expresses reservations about the agreement, does not make the necessary investments in the territories, lacks a citizen security policy that gives confidence and calmness, submits objections to the JEP, [and] introduces legislative reforms that generate uncertainty between victims and combatants.

Duque has already clashed with international observers, including the United Nations, who have repeatedly called on him to move forward with the implementation of key aspects of the peace process.

One of Congress’ major criticisms of the Duque administration’s approach to the peace process is the failure to allocate the necessary funds to effectively implement the peace deal.

For example, a mere $110 million (COP 37.1 trillion) were included in the Multi-Annual Investment Plan for the four-year period 2018-2022, which represents 26% of the total resources needed for the implementation that were calculated for this period by Duque’s predecessor, President Juan Manuel Santos.

In regards to victim reparation, the congressional report slated the government’s tardiness.

According to the report, at the current rate of reparation of registered victims, “it would take us more than 62 years to complete the reparation process.”

“During the first year of the Government of Duque 45,091 indemnities were carried out, while the annual average was 103.798 indemnities per year. That implies that the Duque government is compensating 56% fewer victims,” the document notes.

The Integral Rural Reform (RRI) is another area where the Duque government has come up short, meeting just 11 of the 41 standards required.

According to the report, the Duque government “has blurred” the integral vision of the land reform reducing the process merely to isolated efforts.

“In the first year of the Duque government, access has been generated and a total of 73,465 hectares of small and medium property have been formalized. This represents 8.7% of what we should be doing per year in order to meet the goal established in the Agreement to provide and formalize 10 million hectares through the Land Fund,” read the report.

In addition, the document points out that the investment that has been made in community infrastructure works in priority municipalities “is only 0.08% of the total resources required.”

The issue of reintegration too is a contentious one with the report asserting that Duque’s government is not doing enough to integrate the former combatants into post-war society.

Regarding reintegration, the report states that, “although the government has approved 223 productive projects, 83% of the ex-combatants are not linked to any.”

Another major concern expressed was that of problems with security with the government failing to provide adequate protection to those who laid down their arms.

“From August 2018 to July 2019 there have been 56 homicides of former guerrillas and, in total, there have been 138 deaths of these since the agreement was signed,” highlighted the report.

The authors of the report also expressed doubts about the veracity of government claims that the assassinations of social leaders had been reduced by 35% describing the conclusion as “seriously questionable.”

The high levels of coca, the base ingredient for the production of cocaine still being grown also came under the microscope with the report identifying the lack of progress in eradication and replacement of the crops as a major issue.

A key element of the peace accords was that rural farmers who were relying on the production of coca to survive could replace the crops with legal alternatives.

The report identified “that 62% of the identified coca lots are still located in the same sites, which shows that the State has not been able to transform the conditions that allow these crops to remain in those territories.”

However under the current administration, in many cases this has not been achieved.

Although there was a reduction of 2,000 hectares planted between 2017 and 2018, the research indicated that this could not be attributed to Duque’s government strategy with any certainty “because it only took into account four months of the current government.”

Ahead of his election last year, Duque and his far-right Democratic Center party have continually voiced their opposition to the agreement that ended a more than 50-year armed conflict.

This opposition is apparently reflected in the limited implementation of key elements of the process under the current administration.

The leftist opposition and the center-right voting block demand an inter-partisan table where the legislative agenda can be analysed and the key areas of neglect up to now can be addressed.