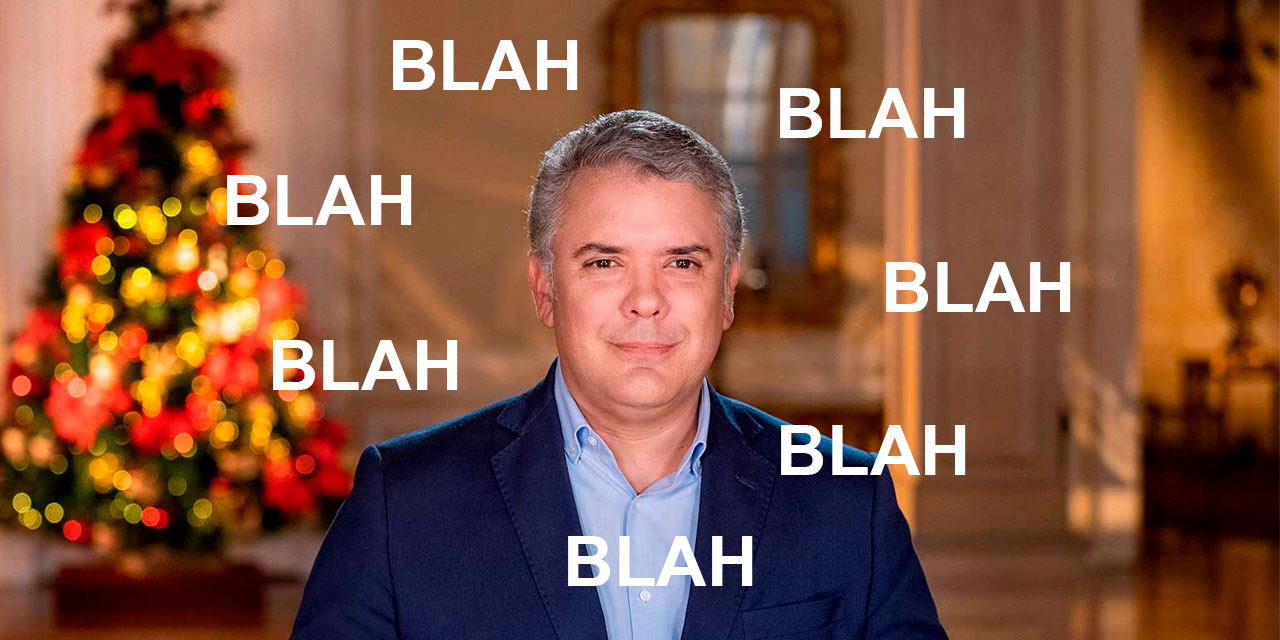 President Ivan Duque on Tuesday promised “more Colombia” in a new-year’s eve speech that was full of resolutions, and his trademark lies, half-truths and doublespeak.

In his televised speech, the president ignored the anti-government protests that have marked the last six weeks of 2019 amid widespread rejection of Duque despite violent attempts to repress the largely non-violent protests.

According to the president, “we started the National Conversation about education, growth with equity, peace with legality, the fight against corruption and youth development.”

This National Conversation includes all of us, which is why the door is open for everyone, absolutely everyone.

The government has refused to negotiate with students, labor unions and indigenous groups that have been at the forefront of the protests that are expected to continue in January.

Before expressing his government’s new year’s resolutions, the president claimed “great progress in regards of security,” ignoring indications that public security has suffered a set-back.

Duque accurately claimed that kidnapping had dropped to a record low and claimed that “we had one of the lowest homicide rates in years,” ignoring the fact that the Medical Examiner’s Office  has registered an increase in homicides since the president took office.

Duque also claimed that the killing of social leaders dropped 25% while this is still being verified by the United Nations whose secretary general warned about an increase in assassination of members of demobilized guerrilla group FARC.

Duque also said his government had delivered 405 public investment projects in areas most affected by Colombia’s armed conflict. According to the UN, the government told the international organization overseeing the peace process it had executed 780 projects.

Amid a registered increase in street crime, Duque said that “we are aware that we must work more energetically to have safer cities. That is why, in the year 2020, we will increase the number of policemen in the cities.”

The president stressed the recent approval of anti-corruption bills proposed by the opposition that obliges congressmen to make their tax returns public and eliminates the possibility of house arrest for public officials convicted of corruption.

Other claims made by Duque, for example about the provision of electricity and drinking water to rural areas, were not immediately verifiable.