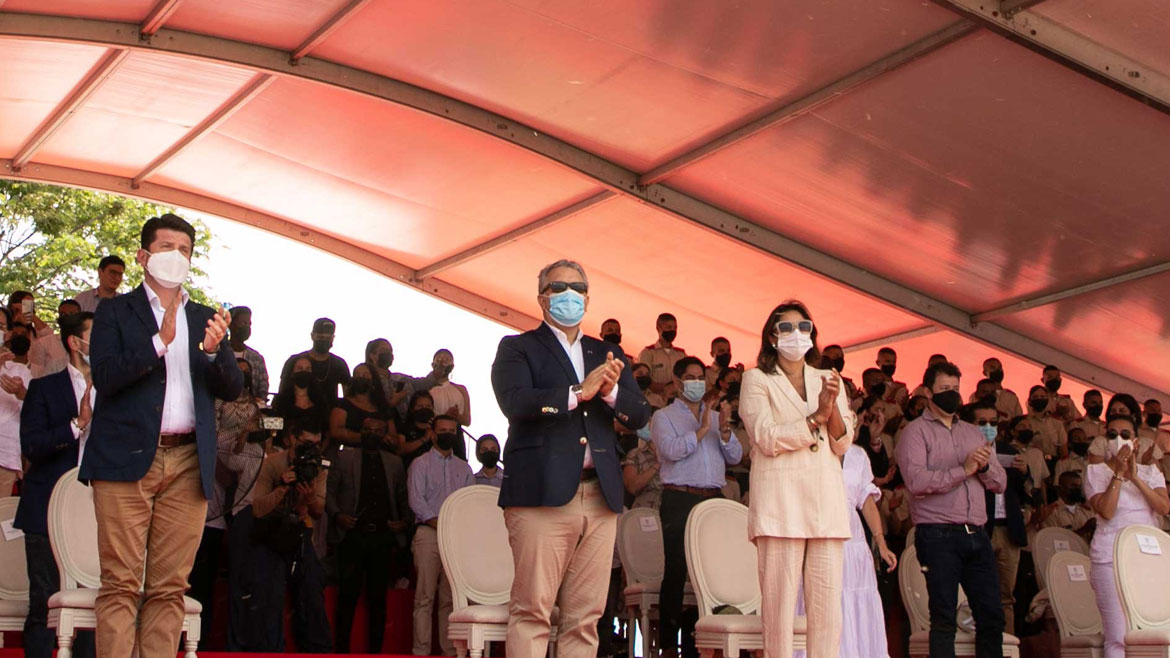 President Ivan Duque formally laid out his government’s priorities for Colombia on Saturday as the far-right president entered his final year in office.

In an address to the military, Duque said that his priorities were finishing his National Vaccination Plan to control the COVID-19 pandemic, the reactivation of the economy, increased support for young people and the poor, and the “defense of legality.”

For the first time since taking office, the president on multiple occasions referred to the implementation of peace policies and elements of a 2016 peace deal signed between demobilized FARC guerrillas and Duque’s predecessor.

The president reiterated that his most urgent priority was the vaccination of more than 35 million Colombians, or 70% of the population, before the end of his term in August next year.

Duque vowed to have done this before the end of this year, but has seen his government’s National Vaccination Plan bogged down by distribution issues.

In order to have a government budget with which the president would be able to finance aid for the poor and young Colombians, the president said in July already he would seek a tax reform.

Duque additionally would seek a reform the country’s royalty system that would leave more revenue made from oil and mining in Bogota, government-loyal newspaper El Tiempo reported last month.

The president said he would seek to use the increased tax revenue for “a safe reactivation of the economy” that would prioritize the creation of jobs.

Duque vowed policies that would empower small and medium-sized businesses that historically generate most employment, but were hit hardest by the economic consequences of the coronavirus.

The government’s initial response to the pandemic sought to provide aid to the financial sector, which creates relatively few jobs.

The president’s economic reactivation plans so far failed to create jobs for those who became unemployed during the crisis, data by statistics agency DANE indicates.

Duque said that he would maintain the monthly $45 stipend for the poor and provide free higher education for high-school graduates.

The president did not mention that he sunk plans to expand aid for the poor and that the free education proposal would not cover higher education until graduation.

According to the opposition and leaders of anti-government protests that have been ongoing since late April consider the proposals insufficient and demand Congress to amend the bills so they would result in a meaningful fight against poverty, which skyrocketed as a consequence of the coronavirus.

Duque’s defense of “legality” includes a reform of the National Police, which is accused of committing crimes against humanity in its attempts to quell massive protests against the far-right government.

The president did not mention any police reform, but said his defense of legality “implies the protection of peaceful protest without being considerate with vandalism, destruction [and] with low-intensity terrorism.”

Duque has been claiming that violent incidents that occurred during the largely peaceful protests were part of a low-intensity terrorism campaign.

Peaceful protest is defended and protected, but where there is vandalism and crime, the Colombian State will be there to protect the rights of all.

Defense Minister Diego Molano previously implied that this alleged terrorism campaign justified the use of military resources against the social organizations opposing the government.

The security forces have come under scrutiny after human rights organizations reported the killing of at least 80 protesters, the disappearance hundreds of young people and the allegedly illegal detention of thousands of people.

A final effort for peace?

More than in any of his previous “Battle of Boyaca” speeches, the president committed to implement peace policies and specifically the peace deal between the FARC and former President Juan Manuel Santos.

In an indirect snide to his predecessor who won a Nobel Peace Prize, Duque said that that #peace is not in awards or applause or in the distinguished halls of international diplomacy. Peace is built in the territories.”

For three years, the president has reluctantly implemented parts of the peace process while blatantly violating others.

In his last year, however, Duque vowed to focus particularly on social development in war-torn regions that was designated as priority areas in the peace deal and in many cases have seen the a return of violence and armed conflict during the current administration.