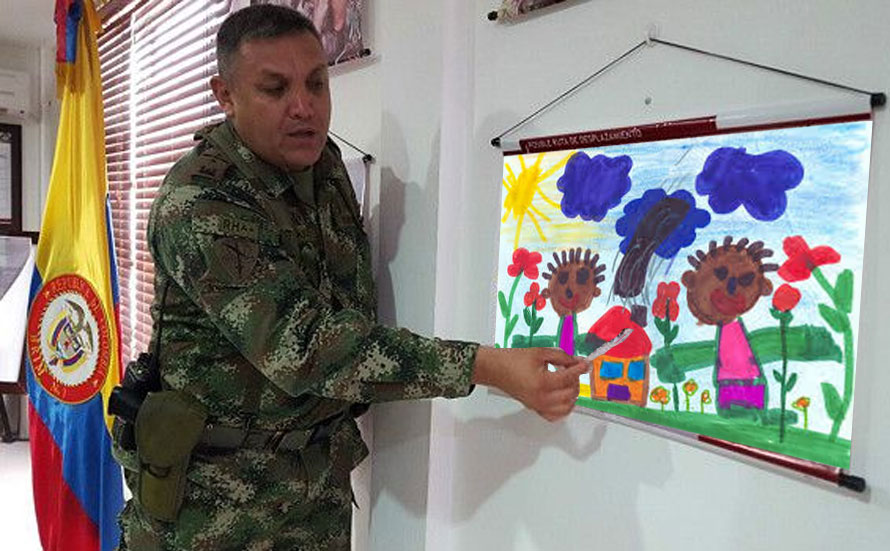 Colombia’s largest paramilitary group, the AGC, on Thursday offered to buy the weapons of disarming FARC guerrillas after the United Nations found the government failed to provide containers to safely guard the arms.

The initial idea was to use the FARC’s weapons to collect the weapons, keep them in containers before melting them down for the construction of three commemorative art pieces.

However, according to the United Nations the government has so far failed to provide the containers, leaving the FARC guerrillas armed to the teeth in demobilization camps.

The Gaitanista Self-Defense Forces of Colombia have long supported the peace process with the FARC and will continue to do so. If the UN is unable to receive the arms, we are more than willing to take them off their hands. The financial resources are available.

According to the AGC, the paramilitary group will use the arsenal to increase its control over abandoned FARC territory.

The current public security situation in the countryside is out of control as a variety of newly formed armed groups and death squads are violently trying to fill the void left by those communists. Public order requires an effective monopoly of violence. With the revenue of our drug trafficking activities, we can secure this monopoly much faster and more effective than the state. We would even be financially contributing to the peace process.

The military’s lack of will or ability to effectively leave their barracks and assume territorial control of Colombia’s vast countryside has caused major public security issues in areas where guerrillas traditionally maintained public order.

Since 2016, almost 120 community leaders were assassinated. The military’s realization it’s virtually useless has caused a “mass depression that has affected the armed forces,” Villegas explained.

Before asking General Javier Florez, the official in charge of the security forces’ failing attempt to carry out its most basic duties, Villegas stressed that “heroes have feelings too.”

Imagine not being able to win a war in more than 50 years and subsequently failing to maintain peace. This would depress any security official anywhere. Our boys are in a bad state.

The minister stressed the soldiers and policemen first must massively “take part in creative therapy sessions” to come to terms with their low self esteem before being sent out to serve and protect the public.

Villegas expected that the policemen and soldiers taking part in the group sessions will be back on patrol “in the second quarter of 2020.”

Meanwhile, the AGC has taken control of approximately one fifth of the country and said to be “ready to assume the monopoly of violence as just one of our many civic duties.”

“Last year alone we killed three times as many community leaders than the army killed members of our group,” the AGC stressed, “it should be evident the monopoly of violence is best off in our hands.”

Disinformation is Colombia Reports‘ satire section. Photos in this section may be manipulated and information may be completely false. If you want to contribute to this section, feel free to send us your ideas.