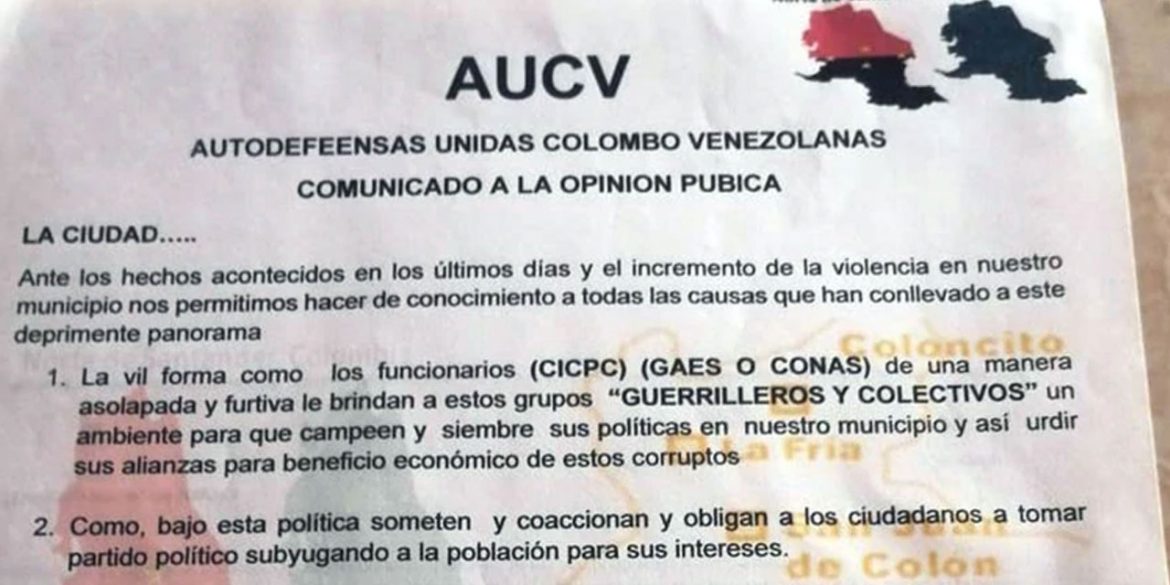 Colombia’s authorities confirmed another massacre on Monday amid an apparently intensifying turf war over control over the border with Venezuela.

The bodies of three men and one woman were found in Puerto de Santander and a rural area of Cucuta, the main border crossing between the two countries and the capital of the Norte de Santander province.

The gruesome find comes three weeks after at least 10 men were killed in a shootout between illegal armed groups in Boca Grita, a town in Venezuela just five minutes from Cucuta.

On social media, a video of armed men exhibiting decapitated heads has reportedly been circulating.

The shootings and decapitations coincide with the announcement of a new “anti-guerrilla” paramilitary group, the United Colombo-Venezuelan Self-Defense Forces (AUCV), in the border region.

Anti-guerrilla pamphlets signed by this group have appeared in Cucuta and in towns on the Venezuelan side of the border, El Tiempo reported.

Javier Tarazona of Redes, a Venezuelan NGO that has been monitoring the activity of illegal armed groups in the region, told the newspaper that he believes that the AUCV aren’t new at all, but rather a merger of the AGC and the EPL, a regional guerrilla army that has been at war with the ELN over control of the coca-rich Catatumbo region since last year.

The EPL and the AGC allegedly agreed to work together to take over control over the cross-border drug trafficking routes controlled by “La Linea,” a regional crime group that allegedly works together with the ELN.

Tarazona’s hypothesis is supported by Nestor Rosania of the Security and Peace Study Center of the Pontificia Bolivariana University in Medellin, who added that the anti-guerrilla rhetoric only serves to cover up their criminal objectives.

What they are looking for, according to people in the area, is to give it the characteristics of an internal conflict, as happened some years ago with the self-defense groups, but in the end what they want is to control the illegal economies.

Indepaz, one of Colombia’s most renowned conflict monitors, confirmed the EPL-AGC merger is also at odds with drug trafficking organization “Los Rastrojos.”

This former branch of the Norte del Valle Cartel has been virtually wiped from the Colombian map by the AGC after more than a decade of rivalry, but continues to control some routes near Cucuta.

The Venezuelan border has become of increased importance for drug traffickers because of Colombian and US authorities whose resources mainly go to drug trafficking routes in the west of Colombia.

The crisis in Venezuela and that country’s tensions with Colombia and the US has only benefited the illegal armed group and criminal organizations.

Before, the main business in the region was contraband and drugs, but with Venezuela in crisis, human trafficking has become a booming business too.

This has upped the stakes in the region and possibly accounts for the increase in violence.