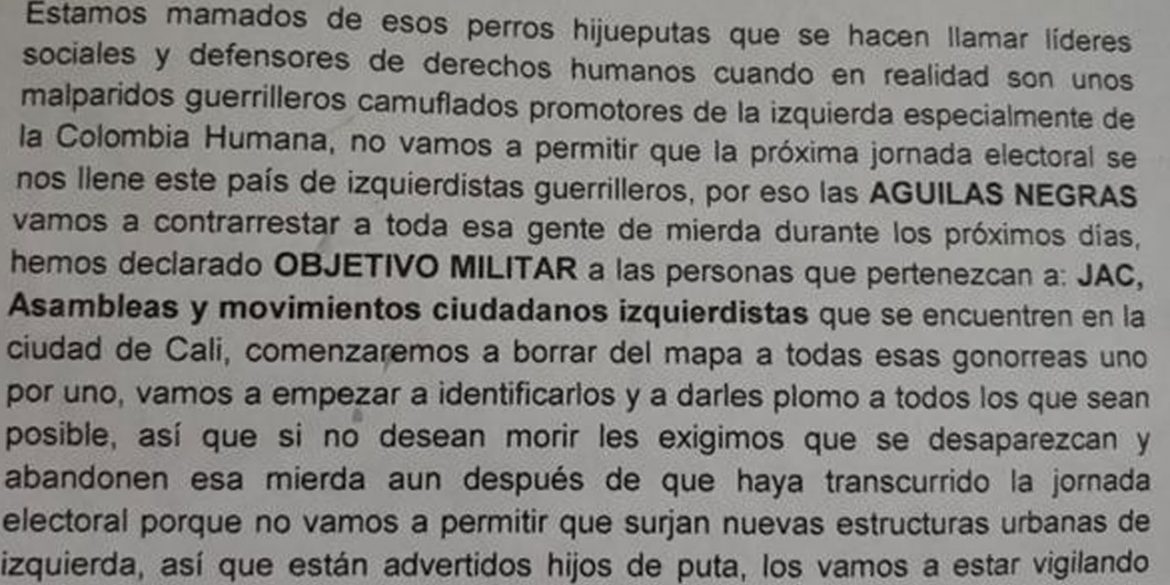 Assassinations of human rights defenders and community leaders dropped 23% in the first half of 2019 compared to the same period last year, but death threats went up 75%, according to a think tank.

In its latest report, think tank Somos Defensores, compared the six months leading up to the election of President Ivan Duque to the first six months of this year.

In the first six months of the year, Somos Defensores registered a drop in homicides from 77 to 59 and a rise in death threats from 272 to 477

The NGO said it feared that the drop in assassinations could be reversed in the second half of the year due to the local elections and armed conflict.

Due to the increased force of conflict in the countryside and the electoral panorama, we fear that the trend will not be maintained and that the figures may increase by the end of 2019, especially the numbers of assassinations.

Somos Defensores fiercely criticized the Duque administration for its denial of reality,  the country’s armed conflict in particular, and consequent attempts to “erase in one blow  what with a lot of effort, we have been trying to build for years, a different country” through the peace process.

The denial of the armed conflict and the disregard of important provisions of the peace agreement between the Government and the demobilized FARC guerrilla group, are examples of what they want to delete with a single click, regardless of whether this destroys the possibility of overcoming an important part of our conflicts.

According to the NGO, the Duque administration “wants to impose a particular ‘order’, molded around its interests, but one that is based on chaos.”

We are going back in time… little by little a chaos is being imposed that destroys all the efforts made by society in recent years to defend life and peace.

Somos Defensores stressed the importance of the effective implementation of the 2016 peace deal with the FARC,  opposed by Duque’s far-right Democratic Center party, in order to prevent a return to armed conflict and political violence.