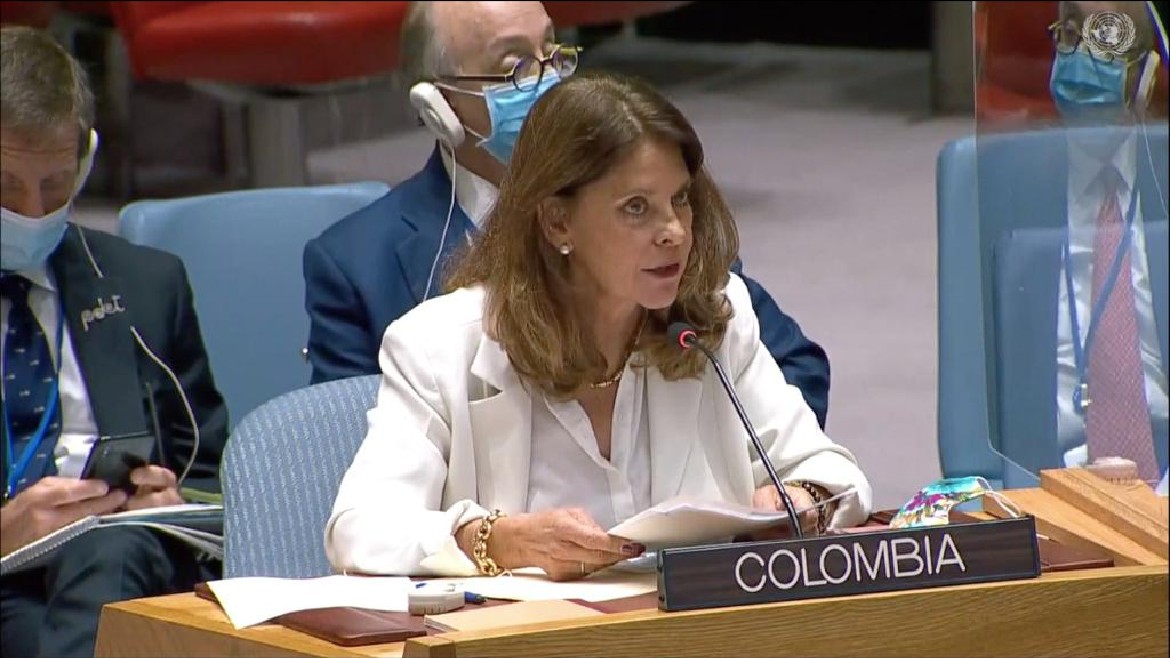 Colombia’s vice-president resorted to blatant lies at the United Nations Security Council to defend against evidence of crimes against humanity allegedly committed to quell anti-government protests.

In an attempt to defend the disgraced security forces, Vice-President Marta Lucia Ramirez falsely claimed that “there hasn’t been a single death” during protests that kicked off on April 28.

What matters is that there hasn’t been one single death during the protests.

According to Martinez, the more than 54 people who were killed were not the victim of police brutality as confirmed by independent media, human rights organizations, social media, and UN observers.

Instead, these deaths were caused by “minorities that infiltrated the protests, engaged in vandalism, destruction and arrived at the protests armed, causing the death of many citizens that were present,” according to the VP.

Evidence indicates that some protesters were murdered by armed government supporters in collusion with the security forces, but Martinez “forgot to mention that there is solid evidence pointing to members of the police in at least 25 homicides,” responded the Americas director of Human Right Watch (HRW), Jose Miguel Vivanco.

The human rights official said last month of the 81 murders that were committed since the beginning of largely peaceful protests on April 28, 39 were directly related to the protests.

In fact, Martinez even forgot that the Prosecutor General’s Office is investigating at least 12 policemen on homicide charges.

The VP, who was responsible for multiple war crimes committed under her watch when she was Defense Minister between 2002 and 2003, apparently is trying to evade even more criminal charges of crimes against humanity that have been meticulously registered by international organizations.

From 28 April to 16 June, the Office of the United Nations High Commissioner for Human Rights (OHCHR) registered allegations of 56 deaths, 54 civilians and two police officers, in the context of the protests; hundreds more were wounded.

The Inter-American Commission on Human Rights even put the government of far-right President Ivan Duque on a watchlist exclusively reserved for tyrants after receiving reports on alleged cases of state sponsored mass killings, rape, forced disappearance and torture.

The IACHR also received serious allegations of the indiscriminate use of firearms against demonstrators and persons not participating in the protests, especially in Cali and different municipalities of Valle del Cauca, as well as in Pereira, Risaralda. The received  complaints reported the use of this type of weaponry allegedly by some members of the security forces, of whom some were not fully identified. The Commission also received extremely worrying information about the possible actions of armed persons dressed in civilian clothes, some of whom apparently acted with the acquiescence of members of the police.

Whether anyone believes Colombia’s VP is unlikely considering the abundant evidence indicating that Martinez is a vicious war criminal with extensive ties to organized crime.

Whether her blatant lies will save the VP from spending much of the rest of her miserable live in prison remains to be seen as the wheels of justice more often than not have proven to be moving excruciatingly slow.