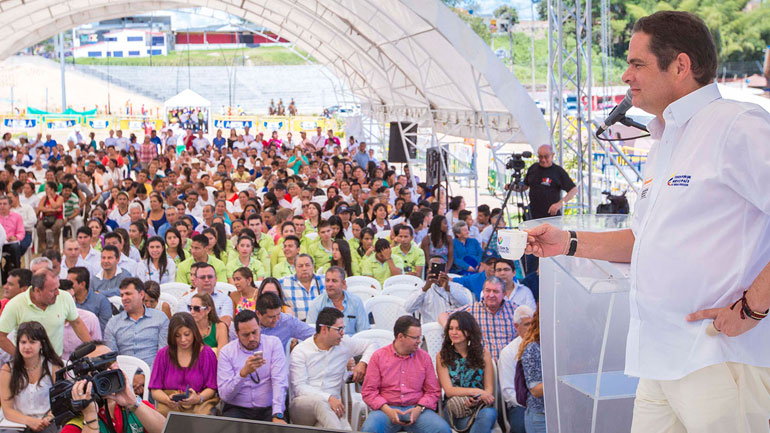 Vargas, a likely candidate in the 2018 elections, has allegedly been using the presentation of public projects to promote candidates supported by his Radical Change party.

“The attitude of the vice president with regard to these allegations, has been indolent and downright challenging to the Colombian electoral system, harming the peaceful passing of elections,” said the letter, referencing claims that the vice president has been involved in government official visits in different provinces, inaugurating works, offering investment, allocating budget and chairing meeting to establish governmental commitments.

The two parties have asked Santos to “put an immediate end to the serious irregularities that are occurring.”

Vargas was also former leader of the Radical Change party, which according to claims reported by El Espectador newspaper, has been taking advantage on the “image” of the vice president and the budget that he manages, to manipulate the elections in their favor.

The current leader of Radical Change Rodrigo Lara denounced such claims saying that “there is not any activity in any part of the country that suggests that the vice president is participating in electoral activities.”

The vice president became leader of the Radical Change party in 2004, six years after the political movement was founded by a group of Liberal Party politicians in protest of links between the party and drug traffickers. The party found itself at the center of  a scandal involving paramilitary support for congressmen in 2006, but was cleared of the accusations in 2013, absolving Vargas of all charges.

The Radical Change leader was granted the role of vice president in 2014 after President Juan Manuel Santos was re-elected, mandated with orienting investments in sectors such as infrastructure, housing and water.

According to El Tiempo newspaper, he is currently leading an “ambitious” infrastructure improvement project of roads, airports, ports and railroads with a budget of around $24 billion (70 billion pesos).