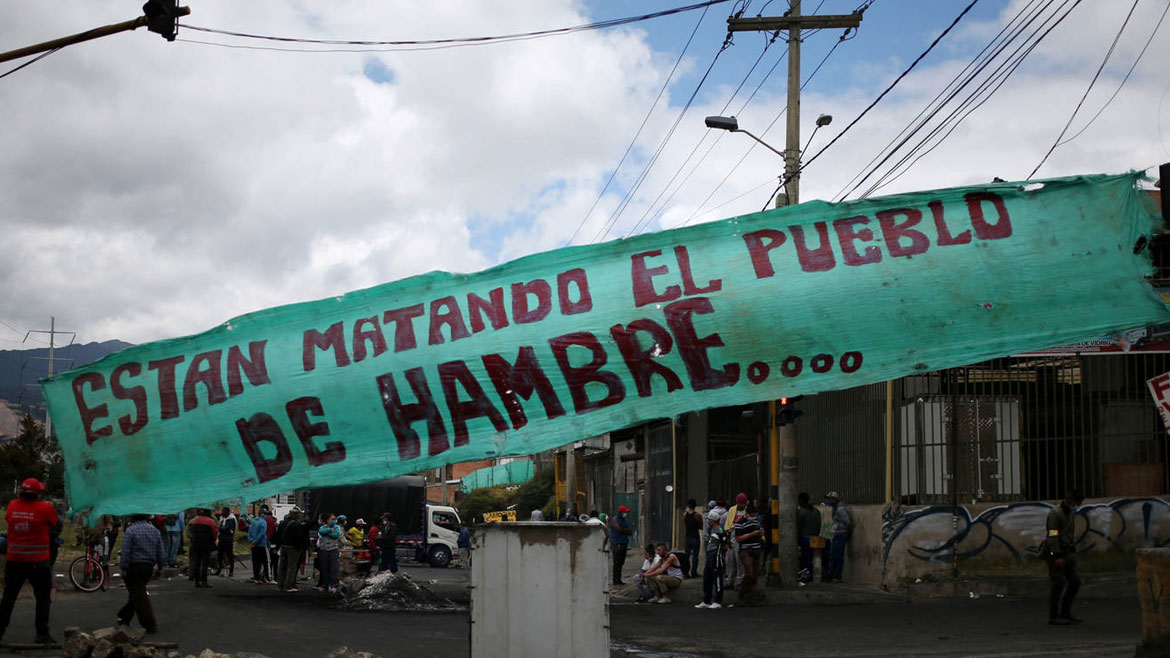 Poverty and inequality reached such levels in Colombia in 2020 that they could destabilize society and impede meaningful economic recovery. Fortunately, not all is lost.

Multiple international institutions have upgraded Colombia’s economic growth projection for 2021, which would allow the country to partially recover the gross domestic product (GDP) that evaporated during the coronavirus crisis.

According to JP Morgan’s projection, which is the most positive, Colombia’s GDP would be back where it was in 2019 by the end of 2022.

The International Monetary Fund (IMF) is a bit more conservative and projects Colombia’s GDP will need until 2023 to reach its 2019 levels.

Why GDP is meaningless

A country’s GDP is a relevant indicator in macroeconomics that allows policy makers to estimate the size of the country’s economy, but it’s also quite meaningless.

Before the crisis, more than half the value of Colombia’s GDP could be found in four sectors; trade, government, manufacturing and tax revenue.

The remaining 45% of the income generated in 2018 went to Colombia’s remaining 40 million inhabitants. Unless you want to sink these people into poverty, you can’t tax them.

The problem with the richest 20% is that they also don’t contribute to domestic consumption, which would stimulate economic growth. Much of their wealth is being funneled to tax havens or invested in stocks.

Where is Colombia’s GDP?

Colombia’s tax agency DIAN in 2019 received $19.5 billion (COP69.1 trillion) in taxes, the equivalent of 6.5% of the country’s GDP. Most of this tax revenue came from the country’s top earners.

The DIAN is missing out on $5.8 billion (COP20.7 trillion), however, due to sales tax evasion and another $6.1 billion (COP21.6 trillion) due to wealth tax evasion, according to its director.

In fact, the DIAN’s former director estimated that one quarter of Colombia’s GDP is being hidden from fiscal authorities.

In other words, the tax office is missing out on almost 38% of the $31.4 billion in taxes it should be receiving as part of Colombia’s elite is hiding almost one third of their assets in tax havens sand what not.

This range of tax expenditures has further complicated the highly complex system, discouraging entrepreneurial initiatives and investments, facilitating tax evasion and avoidance, and also slowing down the country’s economic development. The current tax regime has also failed to address inequalities in income and wealth distribution.

Organization for Economic Cooperation and Development

Meanwhile, economic think tank Fedesarollo estimated that the country’s poverty rate increased from 34.7% in 2019 to between 47% and 49% of the population last year.

This means that some 25 million people lived off less than $91 per month by the end of last year. An estimated 15 million of these Colombians could only afford two meals a day and approximately eight million people of them are literally starving.

Ironically, 60% of government subsidies is being granted by people who aren’t poor, which is most staggering among the elderly of whom only 25% of the country’s elderly receive a pension.

Only 10% of the country’s pension payments are being granted to pensioners who are living in poverty the remaining 90% goes to people who would survive without.

Another 81% of utilities benefits go to people not living in poverty, but benefit from a system that doesn’t make sense and couldn’t possibly be considered fair.

With the social contract we propose we seek to

Sympathy for the rich

When 10% of a society receives 40% of the country’s income and a number of them would be responsible for hiding a quarter of its GDP from the tax office, you have a major fiscal problem caused by organized crime.

When 15% of the people in a society are literally starving, you are dealing with with a humanitarian disaster.

If these two groups of people live in the same country, you are dealing with a ticking timebomb as I don’t think the 5 million people who may be good at finance know how to defend themselves against 8 million pitchforks.

This pressure cooker will blow sooner or later as I have never met a person who would rather starve to death than rob  degenerate criminals who never cared about the suffering they cause.

Fortunately, economists and fiscal experts agree, and are proposing drastic tax reforms to end the tax exemptions for those who don’t need it, lower the tax burden for job creators and a universal basic income for the elderly.

Colombia is full of brilliant minds, many of which studied economy and don’t just believe that the pitchfork scenario can be avoided, but have calculated that a sensible tax reform could lift millions out of poverty, dramatically reduce inequality and significantly stimulate economic growth.