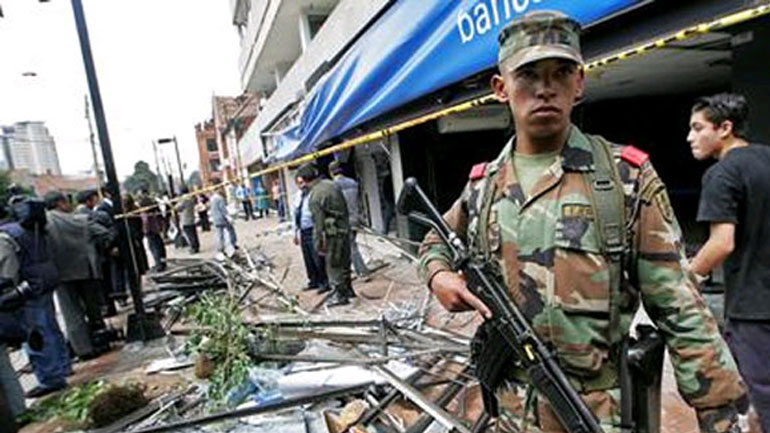 Colombia’s State must pay compensation to families caught up in deadly FARC attacks in Bogota during the inauguration of former president Alvaro Uribe.

The Council of the State charged the State on Monday for the damage caused to families in the northeast of Bogota on August 7, 2002, resulting in a State pay out of almost $35,000, according to RCN Radio.

Families who were residing in the Floresta neighborhood in Bogota at the time of the attack, whose homes were damaged, will receive the compensation.

The high court ruled that the state had failed to protect the neighborhood, despite the fact that there was information suggesting there may be a “wave” of terrorist attacks around the time of Uribe’s inauguration.

Although the attacks on August 7 were directed at the Cadet Military School and the 12th Police Station, the High Court highlighted that the houses surrounding the targets were put at great risk as FARC projectiles were launched around them, resulting in the physical damage of the residents’ homes, according to Radio Santa Fe.

“It was clear to the authorities, through evidence given especially by the advanced criminal investigation and information published by the media, that there was an indication of the terrorist threats surrounding the inauguration of the president of the Republic,” said the court

The case was reportedly brought to light after several members of the Floresta neighborhood sued the state for the material and emotional damage caused by the attacks.

“The authorities should have exercised better control since they were not isolated terrorist attacks, but direct attacks on the stability of the constitutional order, in this case represented by the two establishments mentioned,” said the Council of State ruling.

At least 14 were killed and 40 wounded on August 7 2002 as several attacks were launched across Bogota by Colombia’s leftist FARC rebel group, while Uribe, who promised to defeat the rebels, was being inaugurated.