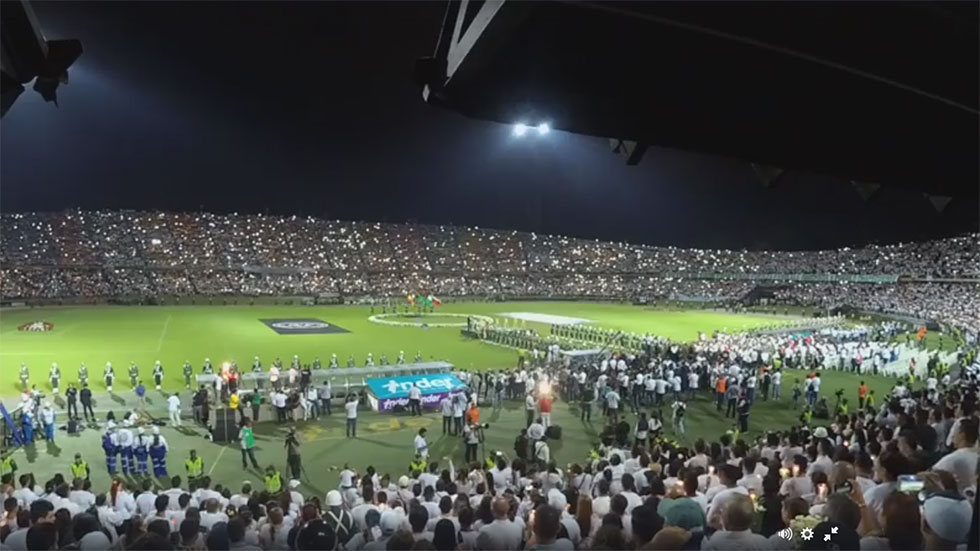 Medellin’s stadium proved too small to shelter the tens of thousands of Colombians who had flocked there in an extraordinary display of solidarity with Brazil’s Chapeco, the city of the Chapecoense soccer team.

Atletico Nacional, Medellin’s largest club, was supposed to play Chapeco side Chapecoense at 7PM for the first leg of the Copa Sudamericana, but the plane carrying the team crashed in the mountains just miles from the Colombian city, killing 71 on board.

The accident sent Chapeco in shock, but Medellin was keen to show their Brazilian “brothers in soccer” they were not alone.

Dressed in white and armed with candles, Nacional fans and other Medellin residents filled the 40,000-seat stadium while tens of thousands stood outside with candles, in tears or praying for the victims’ families.

In the presence of Brazil’s foreign minister, Jose Serra, the stadium held a minute of silence while much of the city remained quiet, refraining from fireworks that have become a custom on the evening before December 1.

The tremendous display of solidarity in return was welcomed with gratitude by Brazilians, who were able to watch the event on Facebook and swamped Atletico Nacional’s social media with signs of appreciation.

On Twitter, the hashtag #GraciasColombia trended globally, mainly because of Brazilians’ and foreigners’ expressions of appreciation.

For the Brazilian top official, the ceremony and the massive display of solidarity for his people almost became too much as he talked to the crowd in the stadium.

From my heart, thank you, Colombia. This great sadness, immense for the families, for all of us … The expressions of solidarity that we have found here have offered a great deal of comfort.

Should the trophy be granted to Chapecoense, it would be similar to what happened in Italy in 1949 when Torino was awarded the championship after their team, 31 people in total, were killed in an air disaster.