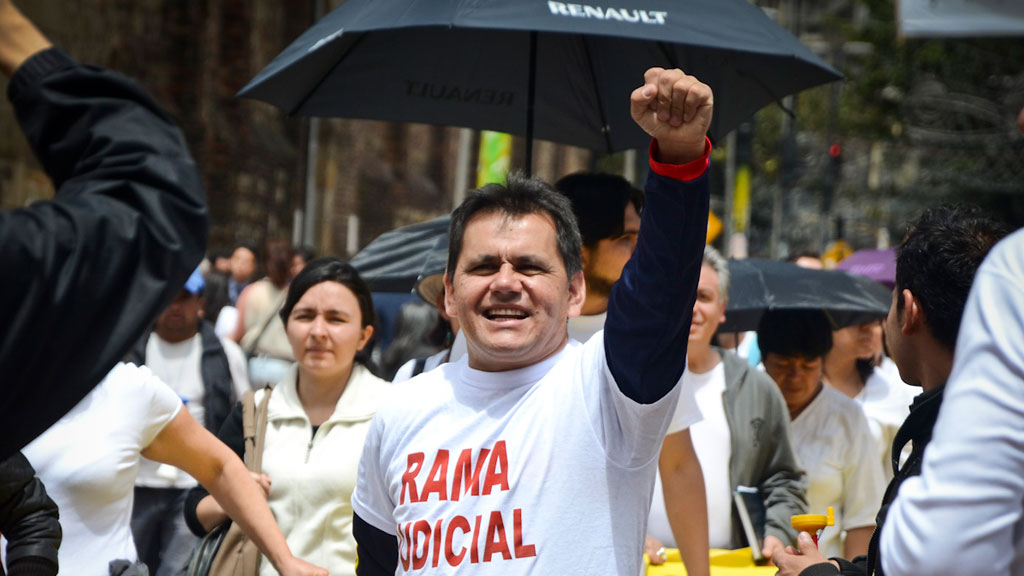 Colombia’s judicial branch is striking for the second time in half a year, along with 334,000 of the country’s teachers, following failure to reach agreement with the government of President Juan Manuel Santos.

The judges again left their offices on Wednesday to unite in protest, with the support of various other areas of national service including the education sector, represented by their respective unions.

The strikes come almost three months after the judiciary resumed its functions following 73 business days of closure in a previous demonstration of dissatisfaction.

The judicial strike is underway despite the fact that not all staff have successfully caught up with the time lost during last year’s protest, which ended in February.

On this occasion the judges fight for changes in wages, bonuses and an expansion of facilities for judicial officers; issues that they believe have been overlooked by the government.

In fact, Vice President of the Judicial Union Gustavo Martinez stated that the government “have ignored the requests of the sector,” according to Colombian news source El Tiempo.

However, the government last year allocated $200 million to the judiciary to extend decongestion methods. Living facilities were also acquired for housing court officials.

The union also rejects the dismissal of some 1,700 prosecution staff who were fired and left jobless unfairly, says the union. A demonstration was directed personally at the Prosecution on Wednesday morning to display such discontent.

The Corporation of Judicial Excellence emphasized in a statement the negative impact that the latest strikes will have on the functioning of the judicial branch and warned that it may worsen “the serious situation of court congestion.”

The previous court strike generated a crisis in Colombia’s prisons. At least 26,600 court procedures were unable to go ahead, nor were the transfers of more than 3,525 prisoners in Bogota. This caused overcrowding in the Immediate Response Unit and police stations.

The Colombian Federation of Education Workers (FECODE) will also begin striking action with a march in Bogota that will leave from the bullring to the Ministry of Education. Similar demonstrations will be carried out in central and emblematic sites in others of Colombia’s major cities.

“There will be a suspension of working activity of our teachers; 334,000 educators,” President of FECODE Luis Grubert Ibarra told Caracol Radio.

The issue of the teachers’ union is a lack of progress in negotiations with the government over their desired improvements to wages and health services, as well as reforms to existent evaluation mechanisms.

“We want to tell the country that we were willing to negotiate, but, seeing no results, we had to use this tool as a last resort to make ourselves heard,” explained Grubert.

Grubert told W Radio that Colombian President Juan Manuel Santos had pledged to increase resources for educators in the National Development Plan, but is yet to fulfil the promise.

The union leader said they spent 50 days of discussing the issue with the government, but nothing was advanced or settled.

The FECODE leader claimed that government delegates are not empowered to influence the Ministry of Finance towards an education budget increase. Therefore, the complexity of the situation requires Santos’ direct involvement to be resolved.

“We will ask the president to answer for what he promised. The solution to the strikes is in the hands of the president,” Grubert told W Radio.

However, Minister of Education Gina Parody reported that the government are still in negotiation with the educators and expressed regret that the teachers are exercising their right to protest during class hours.