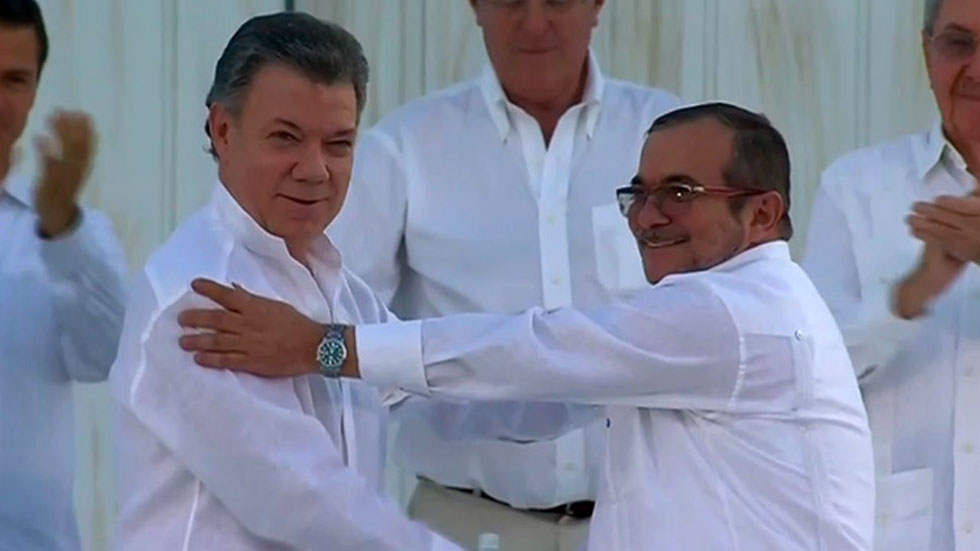 Colombia’s government and the demobilized FARC rebels have conceded that they are no more than half way in terms of the implementation of a peace deal signed last November that ended more than 50 years of armed conflict.

Colombia’s President Juan Manuel Santos and FARC leader Rodrigo Londoño a.k.a “Timochenko” met on Friday to discuss the ongoing problems with the agreement with the head of state satisfied that the “comprehensive review” was “very productive.”

Timochenko, who recently slammed the failings of the government regarding the advancement of the peace process said of the meeting that “the conclusion is that we agreed on everything, and that the glass is half full and we will fill it.”

A year on from the historic signing of the peace deal, the leadership of the FARC has grown more and more frustrated with the inability of the government to deliver on promises made for the implementation of the agreement.

Friday’s meeting came about following concerns from Timochenko about the constitutional court’s decision to allow third party actors in the conflict to appear before a war crimes tribunal on a “voluntary” basis.

The FARC leader claimed that the loophole allowing businesses and politicians to avoid accountability for their actions during the more than half century-long conflict means that certain sectors are “destroying the backbone” of justice.

I feel that there are sectors that are defending their interests and interests very linked to the war that have not wanted to understand the moment we are living. Justice in Colombia was built according to the war, to end the adversary, then it does not give guarantees, what we do not want, what is apparently trying to happen is that they want to destroy the backbone of the JEP.”

The former guerrilla conceded however, that in order for progress to be made on the implementation of the agreement, it is essential that the FARC’s new political party works hand-in-hand with the Santos administration.

“We are partners of that company, the peace of Colombia, and that peace has difficulties at the moment, we are paddling in the same boat, we have to reach a safe harbor and that will not be possible if we paddle in different directions,” said Timochenko.

“We are a serious party and we won’t step back on any of the agreed terms. We are sure millions of Colombians who dream of an end to the conflict are with us, will fight for political solutions and understand that peace is achievable,” he added.

How Colombia’s one-year peace process has changed the country

Speaking on Sunday in the historic theater, Teatro Colon in Bogota, Santos addressed the issue of  Special Jurisdiction for Peace (JEP), upon which congress are due to vote on Monday.

“The Constitutional Court gave a unanimous backing to the special justice (…) I ask the Congress to complete the process as soon as possible for the judges to start their work.”

“This conflict left us 8 million victims. They have the right to know the truth, to receive justice and reparation and to guarantee that they will never be victimized again,” he added.

Santos refuted the criticism of Timochenko and the FARC regarding the failings of the government, claiming that the FARC and the extreme right often “coincide” in seeing the glass “half empty.”

“Welcome to democracy. They are exercising politics,” he said.

As the peace process reaches the critical stage of justice and reparation of victims, Santos urged those who have opposed the process over the past year to embrace it for the good of the future of the South American nation.

“I invite you to build peace, free up all the potential we have and take advantage of all the opportunities that our beautiful Colombia offers us,” he concluded.