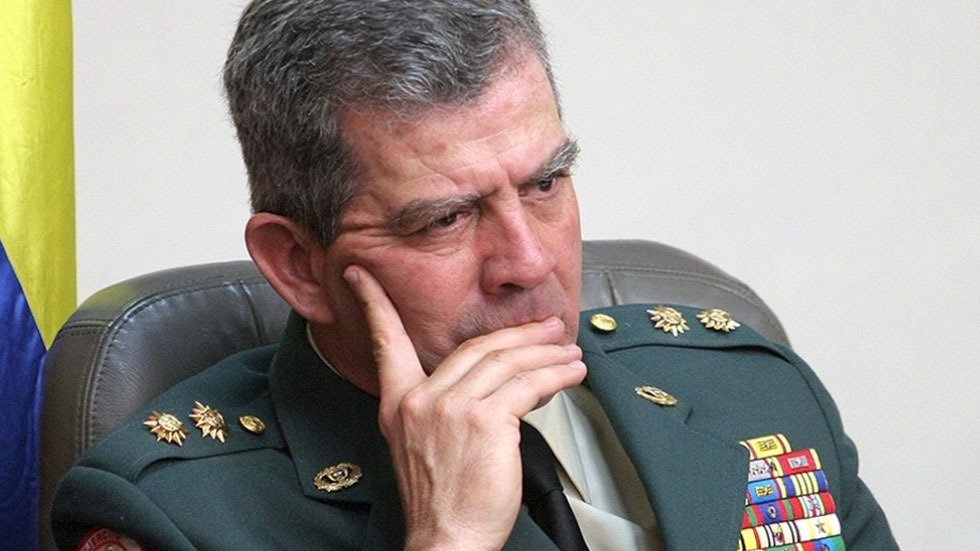 Human Rights Watch (HRW) said Tuesday that, based on the testimonies of six generals, Colombia’s former army commander knew about the mass killing of civilians who ended up registered as combat kills.

HRW released a report on Tuesday of “previously unpublished evidence” further tying former army chief General Mario Montoya to Colombia’s ‘false positives’ scandal in which thousands of innocent civilians were executed, and urging the Prosecutor General’s Office to resume prosecution against him.

According to the United States-based NGO, HRW had access “to hundreds of pages of transcribed testimony provided by six current and retired army generals to prosecutors in closed hearings carried out between August 2015 and January 2016.”

The evidence “strongly suggests that General Montoya knew, or at the very least had information available to know, about false positive killings under his command, and did not take measures he could have taken to stop them.”

Colombia’s so-called “false positives” scandal refers to thousands of extrajudicial killings of civilians by members of the armed forces who dressed their victims as guerrillas in order to present them as combat kills.

The scandal was carried out primarily during Alvaro Uribe’s presidency, under whose watch from 2002 until 2008 extrajudicial killings skyrocketed.

Montoya was Uribe’s National Army Commander from 2006 to 2008, a period that witnessed the highest rate of illegal killings during the scandal.

“Montoya led the Colombian army while it engaged in one of worst episodes of mass atrocity in the Western Hemisphere in recent years,” said Jose Miguel Vivanco, the Americas director at HRW.

“The case against him is a test on how far Attorney General [Nestor Humberto] Martinez is willing to go to prosecute those most responsible for these killings,” he continued.

The most incriminating evidence brought forth against Montoya comes largely from testimony provided by former generals Freddy Padilla and Gustavo Matamoros.

Padilla, who served as commander of the armed forces from 2006 until 2010, said that Montoya attended regular monthly meetings in 2007 with other senior army officials, including then-Defense Minister and current President, Juan Manuel Santos, and the International Committee of the Red Cross (ICRC), to receive information on extrajudicial killings.

According to Padilla, Montoya would have been aware of the complaints lodged against the military as they were discussed in these meetings.

Matamoros, who served as Montoya’s chief of operations in 2008, claimed that authorities from the Prosecutor General’s office informed Montoya of several “false positives” incidents around March 2008.

“If anyone knew everything that was going on, it was General Montoya. Although some say he didn’t know anything, if someone did not report to him, he signed his own death sentence. So everyone reported everything to him and he knew absolutely everything,” Matamoros was cited as testifying in the HRW report.

According to HRW, the new evidence provides “numerous reasons to believe” that Montoya was made aware of and “should have reasonably known” about the rampant illegal killings carried out by the military.

He “had detailed knowledge of combat killings, access to credible reports of false positives, and knew of the implausible circumstances of many reported combat killings.”

The accounts from the generals uphold the connection between Montoya’s pressure on soldiers to increase kill counts and the increase in ‘false positive’ cases.

Additionally, the testimonies suggest he took no action to curtail the illegal killings, and may have destroyed incriminating evidence on the matter.

Prosecutors were prepared to bring charges against the former army chief in March, but the Attorney General’s office canceled the scheduled hearing.

No new hearing has been set yet and according to HRW’s report, the prosecution is on hold.

“The evidence against Montoya piles up only to gather dust in a drawer somewhere in the Attorney General’s Office. It is about time Colombian authorities move forward with this case,” said HRW’s Vivanco.

Once they do, there is a good chance the Special Jurisdiction for Peace, the peace deal’s transitional justice tribunal, will hear the case.

This could prove problematic for the prosecution due to a “narrow definition” of command responsibility, “the rule that establishes when superior officers can be held responsible for crimes committed by their subordinates,” in the peace accords that does not meet international standards.

“Montoya’s case could end up being a paradigmatic example of how the deliberate ambiguities in the justice agreement could be misused to let senior army generals off the hook and to deny the many victims justice,” claimed HRW’s Vivanco.

According to HRW, Montoya is one of at least 14 generals being investigated at the moment for alleged involvement in the ‘false positives’ scandal.