A growing scandal over the rampant corruption in Colombia’s military has reached the country’s army commander, who allegedly blocked investigations into the theft of army supplies.

The snowball of corruption claims are a major embarrassment for President Ivan Duque who promoted General Nicasio Martinez in December, together with generals who were removed from their positions over the past month.

The army chief was already controversial because Human Rights Watch linked him to 23 homicides, including that of a 13-year-old girl, and because the New York Times revealed military concerns that Martinez’ orders to double the army’s combat kills and captures could incentivize the mass killing of civilians.

Martinez and the corruption investigation

The latest scandal involving the National Army chief stems from February, three months after he had been promoted from the army’s inspector general to general commander.

At the time, an army captain, a soldier and two military contractors were trying to prove that they were falsely blamed for the 2013 theft of 400 tires from the 3rd Brigade in Cali in their superiors’ alleged attempt to cover up their responsibility.

In the year I was inspector, in 2018, I never had any information or access to this case, which occurred in 2013. 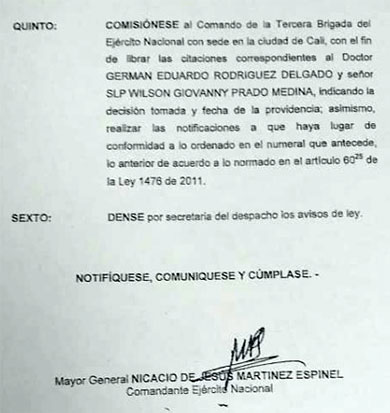 But then Caracol Radio obtained a document from February this year, three months after Martinez became general commander, in which he ordered not to allow the testimony of two of the men who were trying to clear their name.

“Instruct the Command of the Third Brigade of the National Army based in the city of Cali to exempt Mr. German Eduardo Rodriguez Delgado and soldier Wilson Giovanny Prado Medin from testifying,” the signed document said.

When the radio station confronted Martinez with the document, the army commander was forced to admit he did know of the case and that he did block the attempts of the men to go on the record.

Well yes, if it was signed by me, it’s because I knew of it, because I did what I was supposed to do.

The snowball has reached the top

Over the past month, the National Army’s central command already lost six generals due to corruption allegations, including Martinez’ second in command.

The heat has now risen to the very top of the organization, because Martinez will now have to explain why the army’s top commander would interfere in a corruption investigation that is no longer his responsibility.

What could make Martinez’ headache even bigger is that no theft of 400 tires from the 3rd Brigade in 2013 was ever reported in the media, but the embezzlement of 460 firearms, including 50 rifles, was.