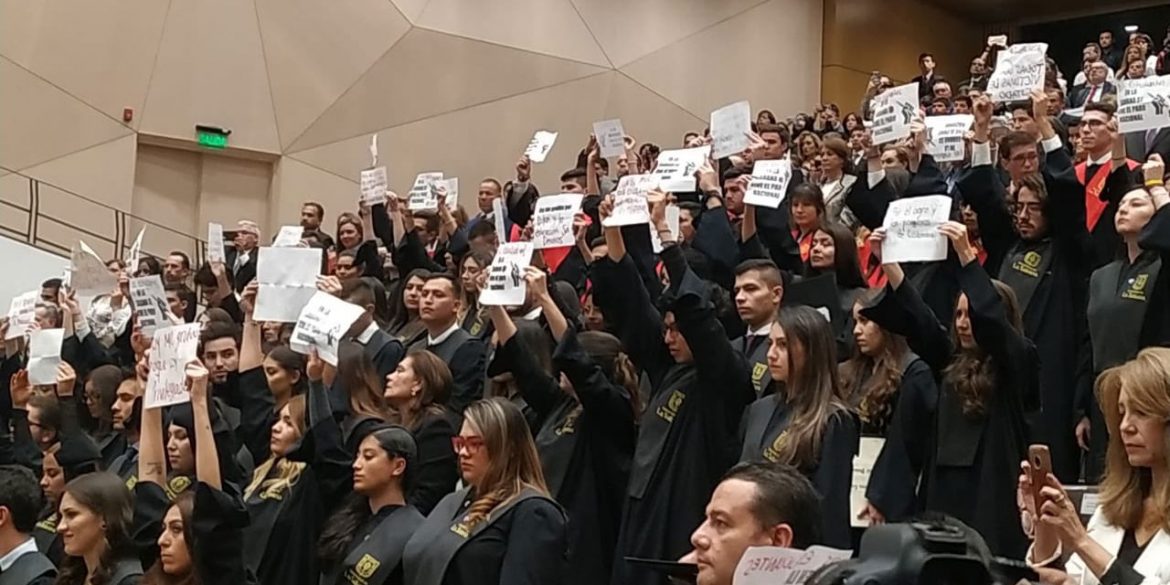 Graduating students protest the death of a high-school student who was shot by police. (Image: Twitter)
News

Protests against the government have intensified after President Ivan Duque failed to kick off negotiations with strike leaders. Reports of the return of violent clashes are reported in Bogota.

In an attempt to appease the population, Duque announced that he would propose congress  suspend sales taxes for three days a year and stressed the virtues of the “National Conversation” rejected by the strike leaders.

The proposal was scorned by citizens, one of whom said: “Porky, please. This is not Black Friday.”

So far, the government’s failure to engage in talks and attempts to unilaterally solve and even deny issues raised by the strike leaders have only intensified protests. Tuesday was no exception.

The failed talks intensified protests almost immediately throughout Colombia and even in congress where administrative workers joined the protests by banging on pots and pans in a “cacerolazo” for a second consecutive day.

In Medellin, the protesters announced they would peacefully occupy the city and regional administration buildings at 9PM in a direct challenge to the security forces.

Meanwhile, after days of non-violence, clashes were again reported between students and the ESMAD, the loathed riot police that killed one protester and that the students want dismantled.

Hooded men, presumably radical students, clashed with police near public universities in the capital Bogota and the southern city of Neiva where three policemen were allegedly injured by a home-made grenade.

The president’s political patron, former President Alvaro Uribe, said on Tuesday that his far-right Democratic Center party had  revoked a proposal that would allow employers to hire workers by the hour.

Colombia’s center-left opposition reiterated its support for the strike leaders and urged the president to restart attempts to negotiate an end of the protests to the protesters.

The center-right voting bloc has acknowledged the legitimacy of the protests. Some senators actively support the strike while others remain neutral.

Duque can only count on the minority coalition of conservative and far-right parties, but this coalition is cracking.

While Uribe’s party stands firmly behind Duque, the Evangelical Christian MIRA party joined the leftist opposition’s call on the president to resume negotiations.

The increase in protests are further deteriorating the position of the government, which has received no support from foreign allies and is further losing support in Congress.