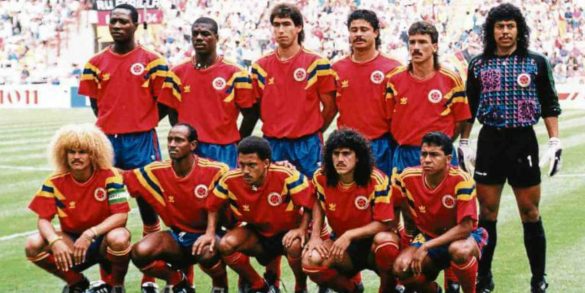 Colombia’s 1990 performance in the World Cup followed a 28-year absence and introduced the world to a legendary generation of players.

“We qualified for the 1962 World Cup, and the best thing you could say about the Colombian team from then until 1990 was that we tied with Russia in 1962  … It wasn’t even a victory,” said Colombian writer and life-long fan of the national team Juan Gabriel Vasquez as he reflected on his country’s 28-year absence from the World Cup.

Colombia had suffered almost three decades of exile from the world’s most prestigious tournament, languishing down the ranks of successive South American qualifying campaigns.

Outside the football arena, the 1980’s saw the rise of the infamous drug lord Pablo Escobar and the Medellin cartel and the subsequent emergence of a rival drug trafficking organization in Cali.

The May 4 assassination of pro-extradition Liberal presidential candidate Luis Carlos Galan demonstrated the utterly dark period the country was going through.

The growing influence of drug cartels in Medellin and Cali escalated the violence with drug kingpin Escobar launching a violent terror campaign against the introduction of extradition.

The bombing of an Avianca passenger flight from Bogota to Cali on November 27, which killed 110 people marked one of the bleakest days of a tempestuous time in the South American country.

This was followed up by the bombing of Administrative Department of Security (DAS) in the capital Bogota on December 6, which killed 52 people and injured approximately 1,000.

Sport took on added significance in the 1980’s with Colombians eagerly following the fortunes of cyclists Lucho Herrera and Fabio Parra and of course the national soccer team, both a welcome distraction from the horror that many were living.

In spite of the backdrop of drug-related violence, Colombian club sides thrived in a period in the late 80s with cartels looking to legitimize ill-gotten gains by pumping funds into local teams.

The period often referred to as “narco-football” changed the face of the domestic league as it was flooded with drug money and increasingly fell under the influence of rival drug lords.

Atletico Nacional made the first significant breakthrough, becoming the first team from the country to win the prestigious Champion’s League equivalent Copa Libertadores, defeating Olimpia of Paraguay in May of 1989, albeit under the influence of Escobar’s fortunes.

In October, Escobar had referee Alvaro Ortega assassinated after a game between Independiente Medellin and America de Cali illustrating the dark side of narco involvement in the Colombian game.

With the drug cartels ever extending their influence on the national league, Colombia still managed to produce what was a golden age of footballers and qualification for Italia ’90 represented the start of a golden era.

Colombia ended the long wait for a second World Cup appearance with a play-off victory over Israel in October 1989.

“Los Cafeteros” had finished third in the CONMEBOL South American section of qualifying behind Brazil and Uruguay with Argentina gaining automatic qualification as reigning champions.

A goal from Albeiro Usuriaga in the home leg of the play-off in Barranquilla was enough for Maturana’s men to book a World Cup berth as the sides subsequently played out a 0-0 draw in the second leg in Ramat Gan.

The Colombians found themselves in the challenging Group D for Italia ’90 alongside eventual winners West Germany, Yugoslavia and the United Arab Emirates, a debutant in the competition.

With no fewer than nine players from Atletico Nacional in the squad, Colombia opened the World Cup campaign in Bologna on June 9 against the United Arab Emirates.

Deportivo Cali’s Bernardo Redin opened the scoring in the 50th minute when he got on the end of an Alvarez cross to put Colombia in the driving seat.

Team captain Valderrama ensured victory four minutes from time when he broke from the halfway line to finish past Muhsin Musabah in the UAE goal, giving his side the perfect start to the tournament and marking a first ever World Cup win for “La Tricolor.”

Next up for the Colombians was Yugoslavia, the team to which they had suffered a 5-0 humiliation in their last World Cup appearance in 1962.

In a game dominated by the Europeans, Colombia’s ‘keeper and talisman Higuita starred, keeping out a series of efforts from a free flowing Yugoslav attack.

Despite his best efforts, “El Loco” was beaten in the 75th minute when Italy-based Davor Jozic found himself unmarked in the box to smash a powerful volley into the roof of the net.

A subsequent penalty save from Higuita kept the game alive but Colombia failed to find a breakthrough meaning that securing a point against a much-fancied West Germany in the final group game was necessary to avoid elimination from the tournament.

West Germany, who had already qualified for the second round largely dominated the final group clash in Milan on June 19 justifying the reputation of one of the tournament favorites.

Franz Beckenbauer’s side was rewarded for this dominance in the 89th minute when substitute Pierre Littbarsky got on the end of a tidy move to beat Colombian net-minder Higuita and put the South Americans on the brink of elimination.

Maturana’s side rallied however, and an integrate passing move involving Valderrama in the midfield resulted in “El Pibe” playing a slide rule pass to the onrushing Freddy Rincon who slotted through the legs of German ‘keeper Illgner to save Colombia at the death and secure a spot in the last 16.

The Stadio San Paolo in Naples was the location for Colombia’s first ever game in the knock-out stages of the World Cup where one of the revelations of the tournament, Cameroon lay in wait.

Colombia went into the game confident of progressing against the African nation that was aiming to become the first from the continent to win a knock-out match in the World Cup.

The game was evenly fought throughout with neither side managing to make a breakthrough in 90 minutes, forcing the tie to extra-time.

Proceedings were turned on their head in the 106th minute when Cameroon substitute Roger Milla broke through the Colombian defense to put the African side 1-0 up.

The 38-year old striker doubled his team’s lead when Colombian ‘keeper Higuita made a trademark attempt to dribble up-field only to be stripped of possession by the veteran who stroked the ball into an empty net.

Colombia’s Redin pulled one back for “Los Cafeteros” in the 115th minute after a fine move orchestrated by “El Pibe” but it was too little too late as Cameroon progressed to the quarter-finals.

The start of a golden era?

The evolution of the Colombian team under Maturana had seen it make a major breakthrough in 1990, qualifying for the knock-out stages of the World Cup for the first time in its history.

With a relatively young age profile and a backbone from Atletico Nacional’s 1989 Copa Libertadores-winning team, it seemed unlikely that another 28-year absence from world football’s top table would be on the cards.

While problems at home with drug trafficking and political violence would continue to spiral, the progression of stars like Andres Escobar, Valderrama, Rincon and later Faustino Asprilla gave football fans nationwide an injection of Colombian pride with subsequent World Cup qualifications.