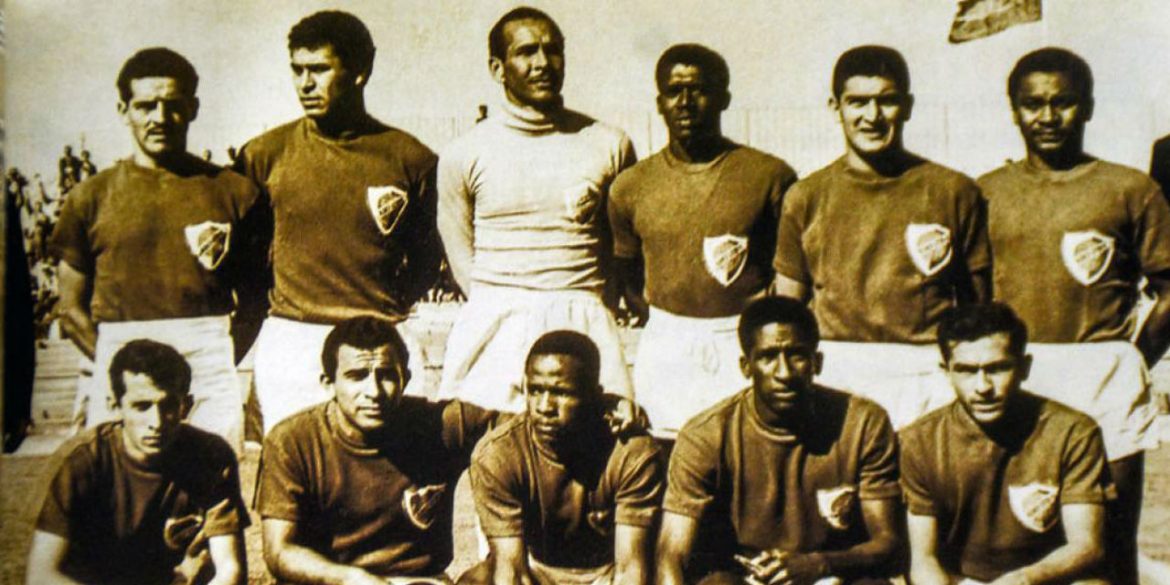 “Lads, I hope you do well, score lots of baskets,”…. less than inspiring words from Colombia’s President Alberto Lleras as Colombia’s soccer team departed on its first ever World Cup appearance in Chile in 1962.

The ignorance of the president, not realizing that they were indeed a team of footballers perhaps represents where the national team stood at the time in Colombia.

The landscape of the sport in South America in this era was dominated by Argentinian, Brazilian and Uruguayan teams.

A dispute between the domestic league body DIMAYOR and world governing body FIFA between 1949 and 1954 saw Colombian teams banned from international competition during a period known as “El Dorado.”

While the national team suffered in isolation, a players strike in Argentina resulted in an influx of foreign players into the professional league in Colombia, which was established in 1948.

Colombia’s domestic league thrived during this time but mainly due to the influence of these foreign players with regional and club rivalries dominating the interests of locals at the time.

This success was not reflected in the national team who had to wait until 1962 to first qualify for world soccer’s biggest stage.

Colombia, under the stewardship of Argentine Adolfo Pedernera, who was known as “El Maestro,” qualified for the competition by virtue of a play-off win against rivals Peru.

Pedernera’s side beat the Peruvians 1-0 in Bogota on April 30, 1961 before following it up with a 1-1 draw in Lima a week later to progress to its first World Cup in the country’s history.

Colombia was drawn in a difficult Group 1 that featured two-time world champions Uruguay and the then-communist powers of Yugoslavia and the Soviet Union.

With the Chilean cities of Talca, Concepcion, Talcahuano and Valdivia ruled out because of damage from a 1960 earthquake, the Colombians found themselves based in Arica, a city bordering Peru for a first crack at the world’s most prestigious tournament.

Colombia opened the competition with a clash with the 1950 winners at the Carlos Dittborn Stadium and got off to a great start when Francisco “Cobo” Zuluaga scored from the penalty spot in the 19th minute to register the country’s first ever World Cup goal.

In a time when substitutions were not allowed in the World Cup and cards did not exist, players used any means necessary to stop an opponent and the 1962 competition was recorded as one of the most violent in history.

According to Colombian striker German Aceros, the Uruguayans took full advantage of the state of the rules and sought to use their physicality to curb the influence of “Los Cafeteros.”

Aceros claims that the game turned on its head when goalscorer “Cobo” was punched by a Uruguayan striker while defending a corner fracturing three of his ribs, thus forcing Colombia to play with 10 men.

The Uruguayans drew level in the 56th minute when attacker Luis Cubilla scored while Colombia were then reduced to nine players when star striker Delio “Maravilla” Gamboa sustained an injury that forced him to retire.

Uruguay pressed further and got the decisive goal in the 75th minute when Jose Sasia netted to spoil Colombia’s opportunity to win a first World Cup point.

Next up for Colombia was the reigning European champions the Soviet Union who played Colombian club side America de Cali in a friendly in preparation for the tournament.

The communist nation sparked great interest from the local media with newspaper El Tiempo carrying a headline “America against Russia” as Cold War tensions were arguably at their peak.

In the lead the Group 1 tie on June 3,  El Tiempo described it as “David and Goliath today in Arica” as few gave Colombia a chance of competing with a star-studded USSR outfit.

Two goals from Valentin Ivanov and one from Igor Chislenko saw the Russians take a commanding 3-0 lead in the first half, with Aceros pulling one back for Colombia in the 22nd minute.

The Soviets went further ahead in the 57th minute when Victor Ponedelnik extended the lead to 4-1 but what happened next was one of the great World Cup comebacks as Colombia responded with three goals to stun the Russians.

Marcos Coll made World Cup history in the 69th minute when he scored an Olympic goal (directly from a corner) against Lev Yashin, known as the “Black Spider,” who was regarded as the best goalkeeper in the world at the time.

Coll remains the only player to ever score such a goal in World Cup history and it sparked a revival of the Colombian team on the day as further strikes from Antonio Rada and Marino Kligner earned a 4-4 draw, really announcing Colombia’s arrival on the world stage.

Colombia’s El Espectador newspaper headlined with “Colombia Experiences Hours of Collective Madness after Triumph in Arica” while British media carried slogans such as “Viva Colombia” in appreciation of the historic dent put in the fortunes of the communist kingpins.

Colombia went into the last group game needing a win to advance to the quarter finals but faced a difficult task against a Yugoslavia side that had been runner-up to the Soviet Union in the 1960 European championship.

After the dramatic high of humbling the European champions in the previous round, the Colombians were brought back down to earth as a rampant Yugoslavia tore their defense to shreds.

A brace of goals from Milan Galic, two more from Drazen Jerkovic as well as one from Vojislav Melic powered to Yugoslavia to a comprehensive 5-0 win thus ending Colombia’s involvement in the tournament.

While Colombians were disappointed to exit the tournament in such fashion, media such as El Tiempo hailed the participation of the team carrying a June 8 headline, “Colombia falls, but with Honor” in the aftermath of the defeat to the Yugoslavs.

While Colombia just managed to register one point from three games, finishing bottom of the Group 1 table, reflections on the 1962 World Cup have centered upon the dramatic performance against the Soviet Union.

The magnitude of the opponent and the manner of the 4-4 draw captured international attention as a team making its first appearance at the tournament had placed itself on the World Cup map.

For Colombians themselves, and perhaps even President Lleras Camargo,  it was a great source of pride that for the first time the national team had gone and competed at the top table paving the way for future generations to follow suit.

“When we returned to Bogota the reception of the people was incredible. They made us all feel that we were part of that team with the joy and satisfaction of having represented the country well in the World Cup. I like them to call us ‘the pioneers,”” commented German Aceros as he reflected on the landmark campaign.