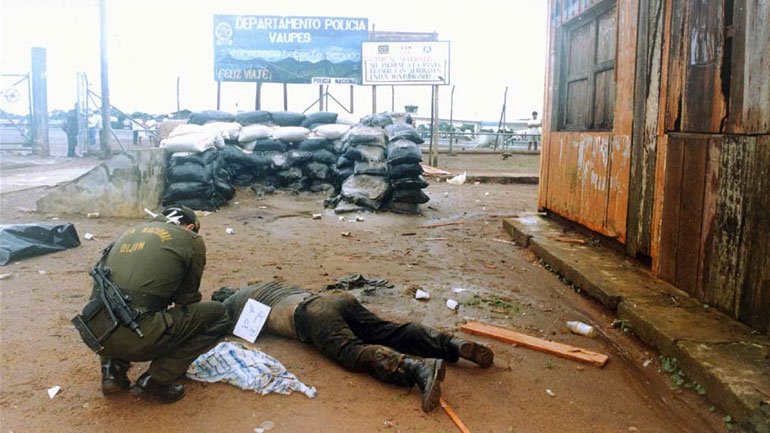 Colombia’s State Council has convicted the state for neglect preceding a 1998 rebel siege on the town of Mitu where FARC guerrillas killed 11 civilians and 30 members of the security forces.

According to the administrative court, the then-government of President Andres Pastrana failed to respond to warnings about a pending guerrilla attack on the town of Tibu, the capital of the Eastern Vaupes province, that ended up costing the lives of 11 civilians and 30 members of the security forces.

In spite of warnings, the national government failed to respond after which the FARC on November 1, 1998 attacked the town with a 1,200-men army.

After having defeated the local security forces, eleven civilians and 30 members of the security forces were executed and a number of buildings of the government and corporations were destroyed.

It took state forces until November 3 to retake the town and the FARC retreated, taking with them 61 policemen and soldiers who had been taken prisoner.

One of these prisoners, now-General Luis Mendieta, became the FARC’s longest-held hostage, but was finally rescued in June 2010, almost 12 years after he was captured.

In spite of the FARC being the aggressor in the case, Colombia’s Defense Ministry has to pay more than $100,000 to the family of one of the civilians who were killed during the 48-hour occupation of the town.

The state’s culpability had more to do with the lack of response to warnings by local residents and police who had been warned about the pending massive attack.

“The population of Mitu, like the Police Department, knew about the imminence of the guerrilla attack and, because of this, had requested reinforcement with the General Police Directorate in Bogota. Nevertheless, these never arrived.”

According to the court, the fact that the country was engaged in an armed conflict, “does not make it constitutionally acceptable that the state leaves victims abandoned.”

The ruling is the first of a number of pending cases of civilians who have sued the state for neglect, according to weekly Semana.