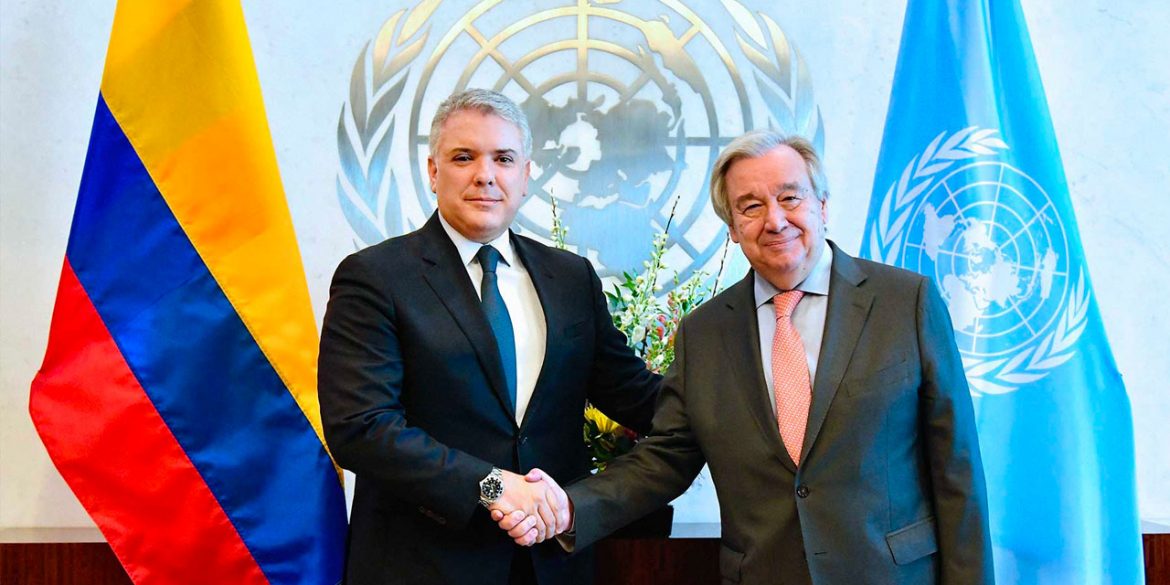 The meeting followed growing tensions between the United Nations’ agencies in Colombia and the Duque administration.

The government is under increasing pressure to implement a 2016 peace deal with demobilized FARC guerrillas and reduce human rights violations by the state, the private sector and illegal armed groups.

Following the meeting, the Secretary General’s Office said that Duque had assured Guterres of “Colombia’s commitment to continue working closely with the United Nations system across its peace, development, human rights and humanitarian pillars.”

The UN Secretary General stressed “the importance of the comprehensive implementation of the 2016 Peace Agreement and effective actions to improve security for local communities, human rights defenders and former combatants.”

Mounting evidence Duque’s far-right party, the security forces and the private sector collude with illegal armed groups the government is supposed to dismantle, have Duque in trouble not just with the UN Security Council, but also Congress and the courts.

The president emphasized that “these organized armed groups… continued to feed on drug trafficking and illegal mining,” but stopped denying collusion with the public and the private sector.

The president would not explicitly commit to his obligation to come up with policies that would end collusion between illegal armed groups, the security forces and the private sector.

Nevertheless, when taking office in 2018, Duque only committed to the reintegration of demobilized FARC members. Over time, Duque has gradually ceded to implement other elements of the peace deal.

On Monday, Duque promised to prioritize “all public policies that have to do with advancing the Territorially Focused Development Plans (PDET) and advancing all policies for the reincorporation of those who abandon violence.”

Duque additionally promised to move forward with “the formalization of land and the inclusion in the Land Bank” of landless farmers to reduce land inequality.