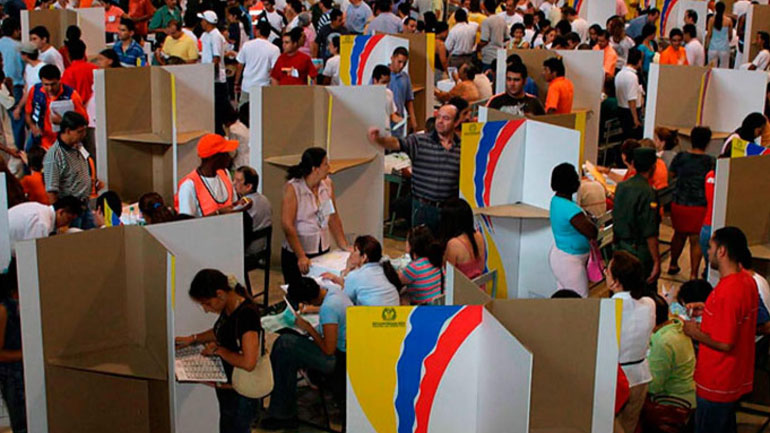 Colombians head to the polls Sunday in local elections whose winners could be tasked with implementing a peace agreement which the government hopes to sign with FARC guerrillas by March.

“The local and regional authorities who we are going to elect will have a huge responsibility,” President Juan Manuel Santos said, encouraging Colombians to vote.

“If we manage to end the armed conflict in the coming months, they will be held responsible for putting into practice the measures that will allow us a successful transition towards peace,” he said.

The poll marks the first local elections since peace talks began in November 2012 between Santos’s government and the Revolutionary Armed Forces of Colombia (FARC).

Voters will elect governors and representatives to four-year terms across the country’s 32 departments, and will also choose mayors and city councilors across just more than 1,100 municipalities.

One of the country’s most widely watched contests will see a new mayor elected in Bogota, a city of some eight million.

The left has been widely criticised for insecurity and chaotic public transportation in the capital, and risks losing its 12-year grip on the city, which it maintained amid numerous corruption scandals.

Center-right candidate Enrique Penalosa, a former Bogota mayor and ex-presidential candidate, is leading with 26-31 percent of the vote, according to polls.

Colombia’s National Electoral Committee said it has registered nearly 150 cases of threats against candidates, while the NGO Electoral Observation Mission reported six candidates murdered and one missing since campaigning began on July 25.

But the Ministry of Defense said elections are taking place in a peaceful atmosphere compared to the past, with the FARC observing a unilateral ceasefire since July.

One of the biggest obstacles to a peace agreement was removed on September 23, when negotiators agreed on how crimes committed during the conflict would be adjudicated.

Experts hailed the move as a milestone and Santos vowed that a definitive peace deal could be reached within six months.