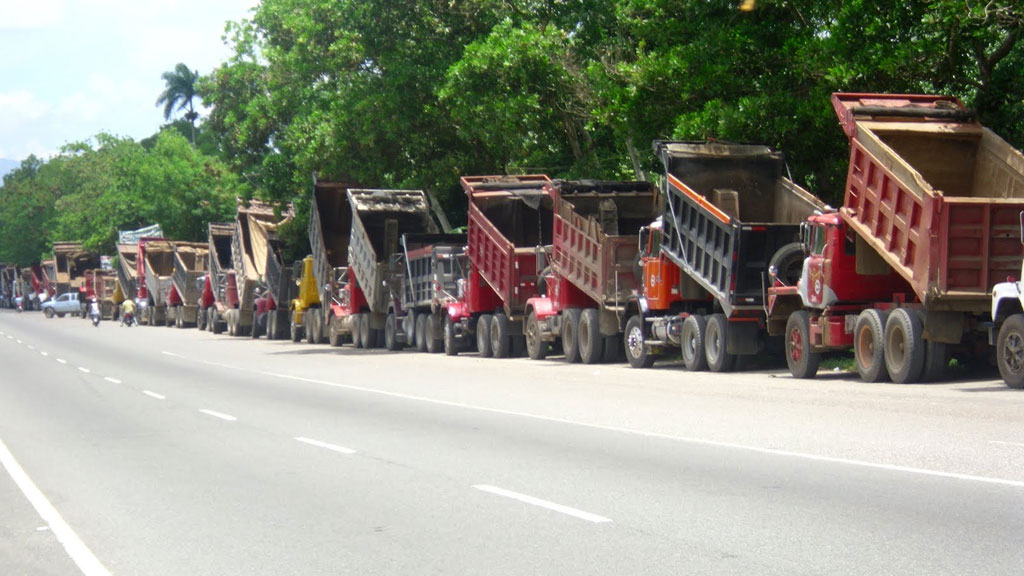 A trucker strike that has kept approximately 40% of trucks off the road in Colombia is beginning to cause food shortages and increased food prices in Bogota and Medellin.

Initially, the truckers parked their vehicles on the side of highways. However, as strikers grow inpatient, some have begun “turtle trails,” caravans of trucks that drive over key transport routes at a speed of 10 to 15 miles an hour.

According to transport association Colfecar, the strikes are becoming increasingly violent.

The cost of the strike

Non-striking truckers have suffered tens of thousands of dollars in damage, according to Sanin who claimed that more than 300 windshields have been smashed.

As a consequence of the 60% reduction in transport capacity and the turtle trails, food distribution centers in both Bogota and Medellin have begun reporting increases in food prices and in some cases shortages in food supplies.

“Food prices have increased between 10% and 15% because of the strike,” Daniel Alberto Mariaca of Medellin main food distribution center told Colombia Reports. The spokesperson reported no significant shortages in food supplies.

According to newspaper El Colombiano, the products that have increased in value the most are the most basic products like potatoes, whose price in Medellin has gone up 37.5% since the end of February.

This price hike is not just due to the strike, but also because some traders inflate their prices using the strike as an excuse, said Mariaca.

A local meat wholesaler told El Colombiano that the arrival of cattle for food production has dropped 30% which has resulted in meat prices not seen this high in years.

The situation in the capital Bogota is more serious, according to local traders.

“A lot of the food products are showing scarcity,” traders representative Gustavo Ladino told radio station RCN. Products that show the most shortages are tropical fruits that have to be brought in from lower regions elsewhere in Colombia.

According to the companies in charge of moving food products from the trucks to the market place, their production dropped 80%, resulting in losses that exceed $2,5 million a day.

According to economic newspaper Dinero, the strike has cost the Colombian economy approximately $300 million.

The truckers strike comes at the worst possible time for consumers.

Inflation had already been inching upward because of a 50% drop in oil prices.

To make matters worse, the harvest season of basic food products have already ended, which naturally generate a slight increase in price.

“Plantain before was valued at COP900 on average, but because we are at the final stage of harvest, it had been set atCOP1,100 and now with the strike it is at COP1,400,” the Medellin wholesaler spokesman told Dinero.

Because basic food products like potatoes and rice are most affected by the strike, the increased consumption prices will affect poor families mostly.

Non-food producers are also suffering from the strike, business association ANDI said Tuesday because the transport of imported materials needed for manufacturing have difficulty reaching the cities from the Pacific port of Buenaventura and the Caribbean ports of Barranquilla and Cartagena.

The latest round of talks between Transport Minister Natalia Abello ended Tuesday and are expected to continue Wednesday evening.

However, to increase leverage, the truckers have been talking with unions from other economic sectors like farmers and taxi drivers.

This could revive a striking wave not seen since 2013 when rural workers, miners and truckers laid down work and blocked roads. Dozens were killed and hundreds were injured when demonstrators clashed with police.

The taxi drivers have already announced to join their trucking colleagues. They will strike on Monday to again demand improved social security, and the ban on carpool app Uber they see as a threat to their livelihood.

Cesar Pachon, one of the main leaders of the rural workers, on Wednesday tweeted he was still reunited with the truckers.