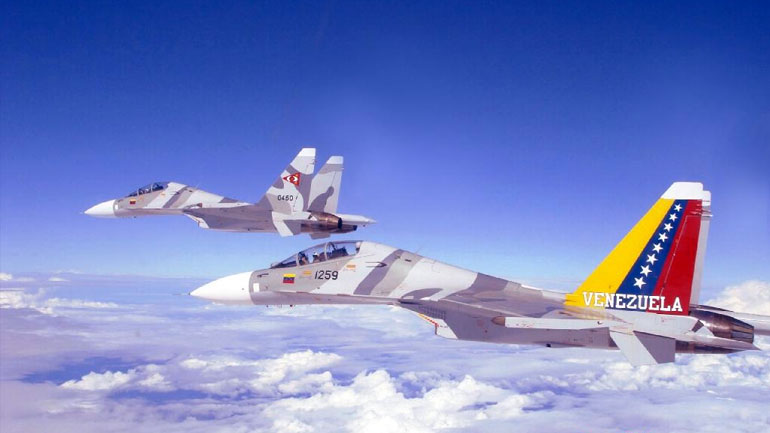 Colombia plans to launch a formal protest Monday against Venezuela for allowing warplanes to cross into Colombian airspace, amid a border crisis between the neighbors.

The Colombian defense ministry said that two Venezuelan military aircraft entered through the Alta Guajira zone on the northern border with Venezuela on Saturday afternoon.

The planes, it said, entered Colombia for nearly three kilometers and then flew over an army unit.

The ministry did not describe the type of aircraft detected.

Caracas accused Bogota of inventing the incursion to scupper a potential meeting between the presidents of both countries intended to resolve their diplomatic and border crisis.

“There is no evidence of the alleged airspace violation of our neighboring country, beyond an invention to prevent a presidential meeting,” Venezuelan Foreign Minister Delcy Rodriguez wrote on Twitter.

“We are concerned about the trend in the Colombian government of inventing incidents that do not exist in order to affect relations.”

Colombian President Juan Manuel Santos said Sunday: “I have ordered @CancilleriaCol (the Foreign Ministry) and @Mindefensa (the Defense Ministry) to launch a formal protest tomorrow against Venezuela for violating our airspace.”

The foreign ministers of Colombia and Venezuela met in Ecuador on Saturday in an attempt to resolve their differences.

While they agreed to renew diplomatic contacts after ambassadors were withdrawn, they failed to find common ground on a meeting between the two country’s presidents.

But Rodriguez said Maduro had ratified a proposal for an “immediate meeting” with Santos “to address the serious humanitarian exodus from Colombian and cross-border crimes.”

Venezuela has deported some 1,500 Colombians living in Venezuela since the crisis began, and 20,000 others have fled in fear, according to the United Nations.

Bogota and Caracas have been in a spiralling row since Venezuelan President Nicolas Maduro closed part of the border on August 19, blaming Colombian paramilitaries for an attack on a Venezuelan anti-smuggling patrol.

Maduro accused Colombia of waging an “attack on Venezuela’s economy”, a reference to the rampant smuggling of heavily subsidized goods out of the oil-rich but shortage-hit socialist country.

In 2010, troops were rushed to the border after the Colombian president accused Venezuela of giving safe haven to leftist Colombian guerrillas.

The crisis was defused when Santos took office.