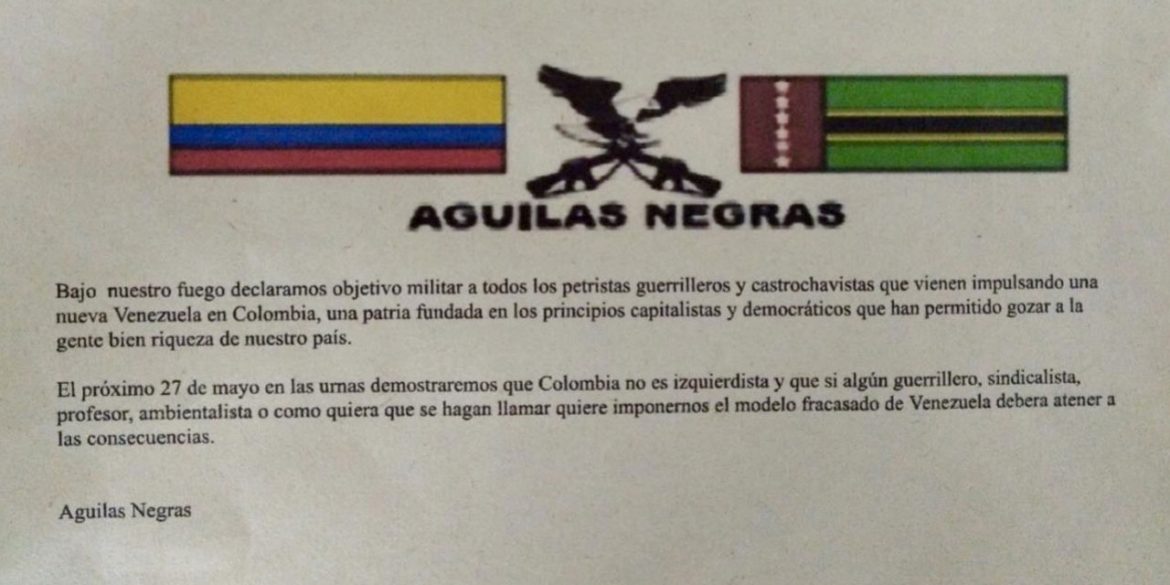 The existence of the group was denied by the National Police as recent as this week after the assassination of two men in the northern La Guajira province shortly after they appeared on a death list signed by the Aguilas Negras.

In the inter-institutional meetings held during 2019, the Attorney General’s Office, the National Army and the National Police reported that to date there is no specific information on the existence of a criminal group called Black Eagles.

But according to newspaper El Tiempo, Prosecutor General Fabio Espitia ordered subordinates to find out who is behind the dozens of death threats against leftists, ethnic minorities and anyone who opposes the government of President Ivan Duque and his controversial political patron, former President Alvaro Uribe.

After giving everyone the opportunity to move away from their leftist processes they lead in their supposed communities by indoctrinating them against the Colombian government… We must reiterate that already today they enter into the real fire of our weapons without mercy.

According to El Tiempo, Espitia ordered to collect the dozens of threats that have been sent in the name of the Aguilas Negras in an apparent attempt to establish whether one specific group is behind the threats after meeting with senators who were threatened.

Analysts told the newspaper that the threats that have appeared in Bogota and La Guajira appear to come from one group after analyzing the language and the use of symbols of the Aguilas Negras.

According to newspaper El Espectador, Police intelligence agents established last year that the group or groups sent 282 death threats between 2006 and 2018 throughout the country.

The language used by the group makes it evident that the Aguilas Negras are radical supporters of the Democratic Center, the far-right political party of Duque and Uribe.

Human Rights organizations have told the Inter-American Commission of Human Rights that the Aguilas Negras operate from within the military. Jargon used in some of the death threats supports this hypothesis.

But analysts have been unable to establish any kind of structure indicating a centralized hierarchy, despite the consistent reference to regional chapters like the “Western Bloc,” “Southern Bloc,” “Northern Bloc,” “Central Command,” and the most active one, the “Capital District Bloc.”