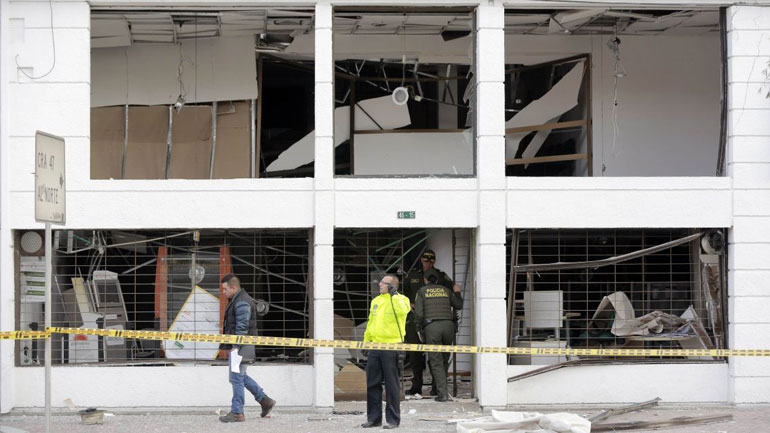 Colombian officials have contradicted each other about who is responsible for the planting of two bombs that went off in the capital Bogota on Thursday, injuring 10.

While forensic investigators were still investigating the locations where bombs destroyed the fronts of offices of pension fund Porvenir, Prosecutor General Eduardo Montealegre reportedly on Thursday accused “guerrillas” to be behind the attacks without specifying whether he had indications that would implicate either the FARC or the smaller ELN.

The suspicion that the attacks could have been carried out by guerrillas was fueled by the fact that Bogota had already increased security measures after a leaked military report alleged that the FARC was seeking to carry out attacks on high-profile military targets in the capital.

However, on Friday morning Interior Minister Juan Fernando Cristo said that it was too early to point fingers as investigations are still ongoing.

A third possibility, common extortionists, was not mentioned as possible perpetrator by any of the authorities.

Bogota interim mayor Martha Zamora also said that “at this moment we cannot consider one hypothesis or establish who could be responsible,” also claiming that evidence from the two sites is still being examined by investigators.

According to Defense Minister Luis Carlos Villegas, preliminary investigations indicated that the explosives used in the almost simultaneous attacks were “low power” bombs that were detonated after the individual offices were warned.

Newspaper El Tiempo reported Friday morning that Police had been able to get images from one of the attackers, a woman.

The target of the attack, Porvenir, made no public statement on the attacks.

Local media increased the number of injured victims to 10 on Friday morning. None of the victims was seriously injured.

Following the attack, President Juan Manuel Santos said he would be returning early from Peru where he was attending a summit of the Pacific Alliance.