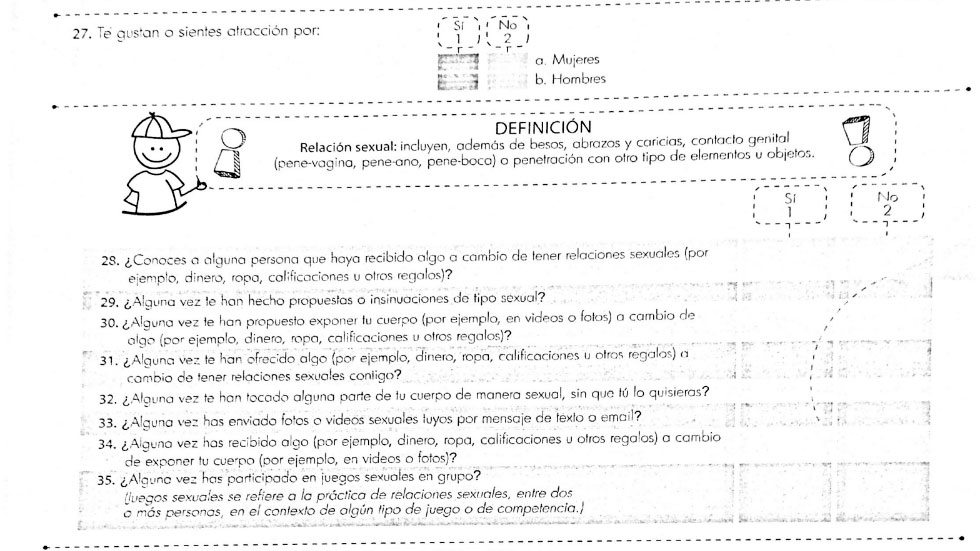 Colombia’s statistics agency DANE has upset schools and parents after issuing a survey for teenagers that includes explicit questions about the minors’ sexual behavior.

The survey is held every few years among teenagers between 11 and 16 to gather statistics about their general well-being, and in particular their sexual well-being and experiences with abuse.

However, this year’s survey stirred up controversy after schools and parents complained about the questions they found more explicit than in previous surveys.

DANE director Mauricio Perfetti defended the questionnaire, stressing it is key for the government’s understanding of teenagers’ sexual behavior and the prevalence of sexual abuse among minors.

The statistics coming from the anonymous questionnaire are used to, if necessary, improve public policies aimed at preventing or prosecuting sexual abuse.

“What we do with this survey is learning about risks … for example, we found that 7.5% of children under 13 have had sexual relations and that 8.9% [of minors] were forced to have relations,” Perfetti told W Radio.

In order to be able to come up with more and better statistics, the DANE teamed up with the Prosecutor General’s Office, the Police, Family Welfare and the health ministry, and expanded the number of questions on the minors’ sexual experiences.

But according to some schools and parents, the authorities went too far and should rephrase some questions considered inappropriately explicit.

“I consider the questions inappropriate for children and parents should have been consulted,” said Fernando Vita of the Union of International Schools.

Vita told W Radio he already has a proposal ready for the rephrasing of the questions considered inappropriate, while downplaying the necessity of data to combat child sex abuse.

“If the statistics are to fill in a few numbers, they are not in the benefit of society,” said the elite school representative.

Sexuality, and particularly homosexuality, continues to be a touchy subject in the mostly Catholic country.

Earlier this year, a coexistence manual for teachers that sought to curb the bullying of gay teenagers caused major controversy.

Conservatives accused Education Minister Gina Parody, who happens to be lesbian, of trying to “sexually colonize” the country’s youth.