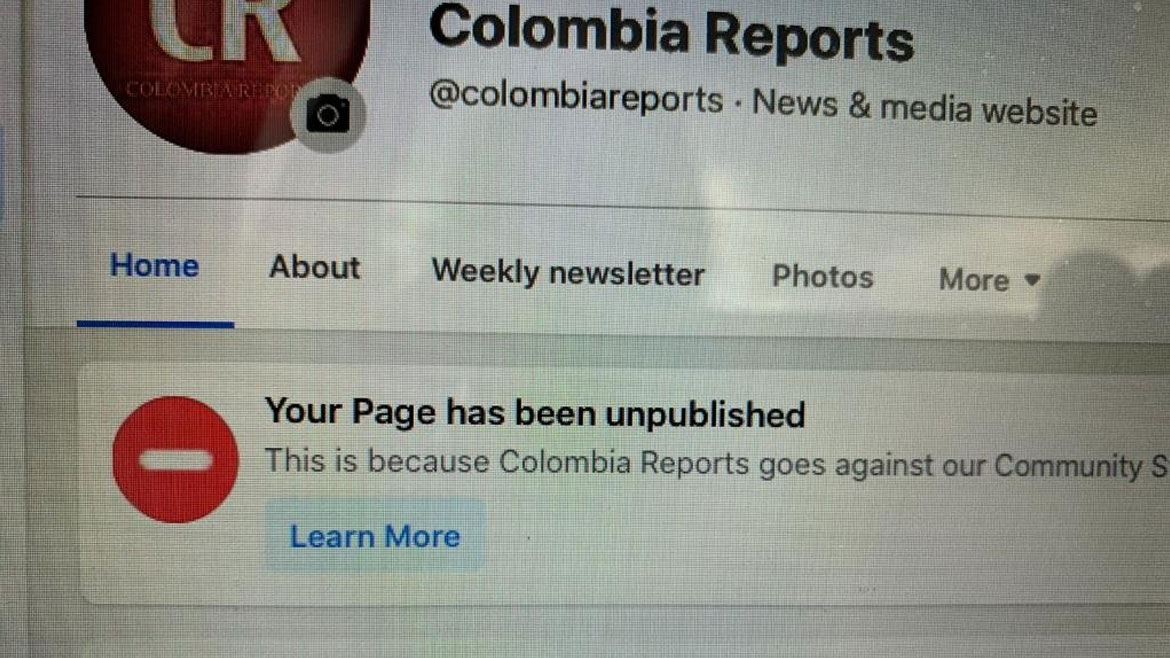 Colombia Reports and the website’s Facebook account were taken down on Tuesday in an unprecedented cyber attack.

The website was back online within hours and the technicians are trying to figure out what caused the blackout.

I am optimistic Facebook will restore Colombia Reports’ page as requested, but this may take a while as multiple pages have been taken down, a community leader told me.

I believe I mistakenly tweeted that Colombia Reports’ Twitter account had also temporarily been taken down, which I now believe was incorrect.

I was woken up and alerted about the takedowns three hours after going to bed and frankly in a confused state of panic.

It appears Colombia Reports got caught up in some kind of cyber war as also government websites have been hacked or taken down.

According to internet Observatory Netblocks, internet in Cali was suffering blackouts around the time locals were reporting deadly attacks on civilians by the security forces.

Hackers’ collective Anonymous released the passwords of military commanders’ emails Tuesday morning and took down the website of President Ivan Duque later in the day.

Dear Colombians, we want to reiterate that fifteen hours ago we fully supported your cause, you are not alone, we are with you, our hearts are broken. We hope that everyone will return home today, the fight does not end, our fight is not over yet, we are anonymous, we are legion. pic.twitter.com/GANf9SpC2C

Social media flooded with expressions of gratitude for Anonymous, which threatened to attack television networks RCN and Caracol that have been grossly misinforming the public.

I have begged followers on Twitter not to take out their anger about the mass media’s decisions on journalists as almost all the ones I know are honest people.

Colombian journalists’ labor conditions are horrible and it would be awful if people would also hold reporters responsible for the censorship imposed on them by their employers.

I will do my best to inform you on the situation in Colombia although I am certain I will make mistakes in the process.

Please let me and all my colleagues do our work in peace. If you run into a reporter of a news outlet you don’t like, just talk to them. It’s the reporters you meet on the street who can tell their bosses in the newsrooms you need them to be honest.