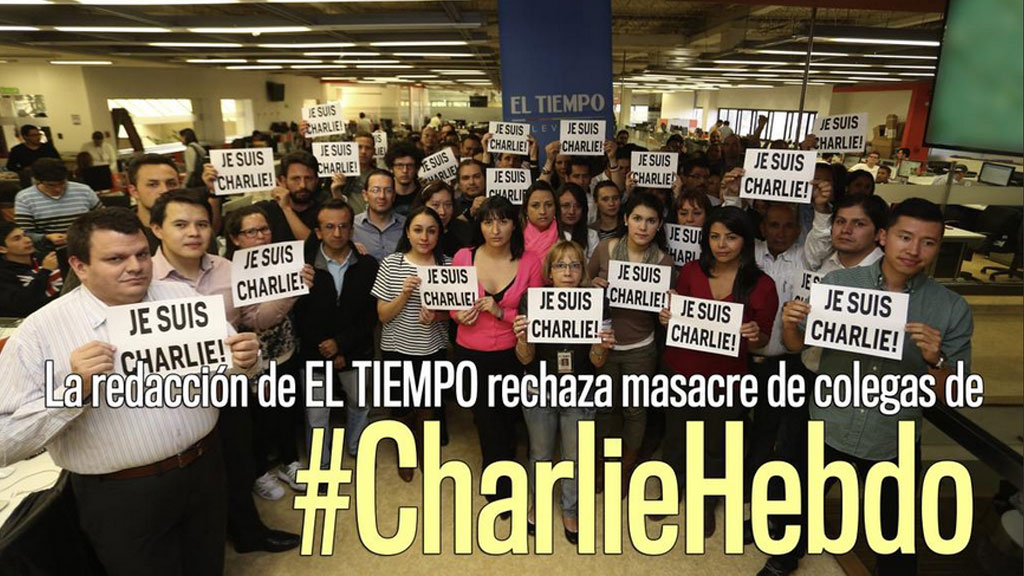 Employees of newspaper El Tiempo express their rejection of the Paris massacre.
News

The Colombian government and media on Thursday rejected an Islamist attack on French satirical magazine Charlie Hebdo that killed 12 and injured 11 in Paris the day before.

While attending a summit in the Chinese capital of Beijing, Foreign Minister Maria Angela Holguin rejected the terrorist attack and expressed solidarity.

While finalizing her speech before Latin American and Chinese political leaders, Holguin said she did not “want to end without first manifesting rejection of the terrorist acts that took place in Paris yesterday, [and] express solidarity to the Government of France and the families of the victims.”

Colombian cartoonists joined the minister in rejecting the attack.

One of the country’s most polemic satirical cartoonists, Vladdo, said on Twitter that “nothing justifies a physical assault on a person because you disagree with his ideas.”

In an interview with his employer, weekly Semana, Vladdo called on Colombian media and Colombian citizens to massively speak out against violent attacks against members of the press and express their support for free speech.

“The best antidote for this is that people speak out and massively reject it, and that the media do the same. That instead of being intimidated, they feel emboldened. Because if not, we end up doing what these gentlemen want and I don’t think that is the role society expects of the press,” Vladdo said.

Colombia’s largest newspaper, El Tiempo, appeared in black and white on Thursday morning “in solidarity with the French media.”

Other national newspaper like El Espectador, and regional newspapers like El Pais from Cali and El Colombiano from Medellin also rejected the attacks in editorials or cartoons.