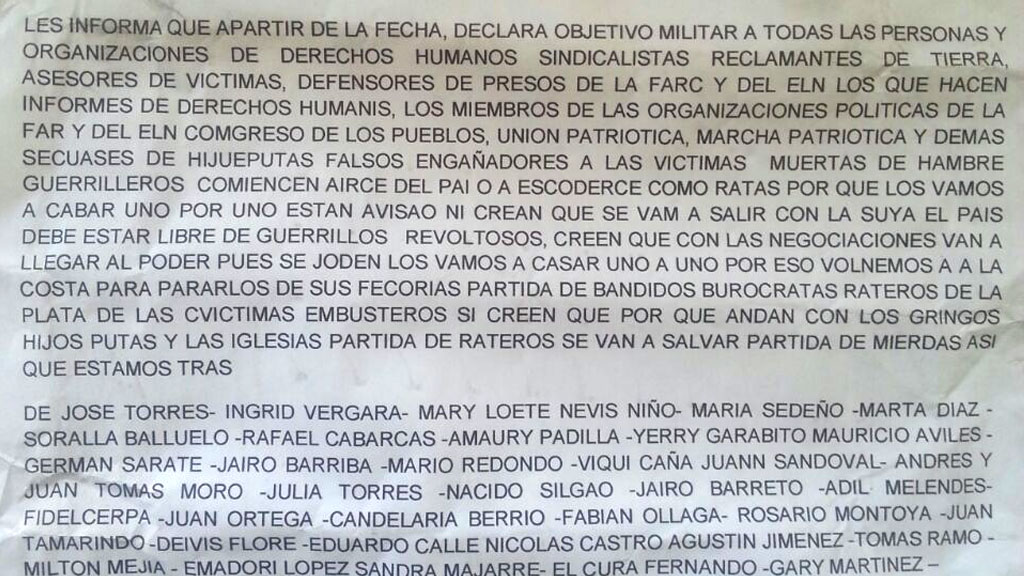 The Colombian government needs to do more to protect human rights workers who have been threatened by right-wing death squads, Amnesty International said Wednesday.

The report recalled that in Colombia, between September and October 2014, more than a hundred defenders of human rights, community leaders, leading promoters of peace and land restitution, politicians and journalists were subjected to death threats from paramilitary groups.

The worst period for the safety of human rights workers in Colombian history was in 2013 when 37 human rights defenders were murdered in less than 6 months, between January and June 2013.

A researcher for Amnesty International, Nancy Torrado, noted that many of these murders could have been avoided “if the authorities had adequately addressed the complaints and had investigated the threats and intimidation of these people.”

In September last year, the government announced new measures to protect human rights defenders as a number of former members of the demobilized paramilitary organization were set to be released from prison.

However, death threats have continued to be sent to human rights workers by some of Colombia’s most feared neo-paramilitary groups, particularly the Rastrojos and the Aguilas Negras.

As many as 38 human rights defenders in the northern Caribbean region received death threats signed so far this year.

A letter, tweeted by the Director of the Peace and Reconciliation Foundation Leon Valencia, shows how the Aguilas Negras announced a “clean-up plan.”

“We have move towards the clean-up for human rights defenders and guerrilla leaders who pose as defenders,” said the group.

Among those threatened are defenders of human and women’s rights, political leaders, trade unionists and people who work for the restitution of stolen land along the coast, including Soraya Bayuelo, who has previously won a National Peace Prize.