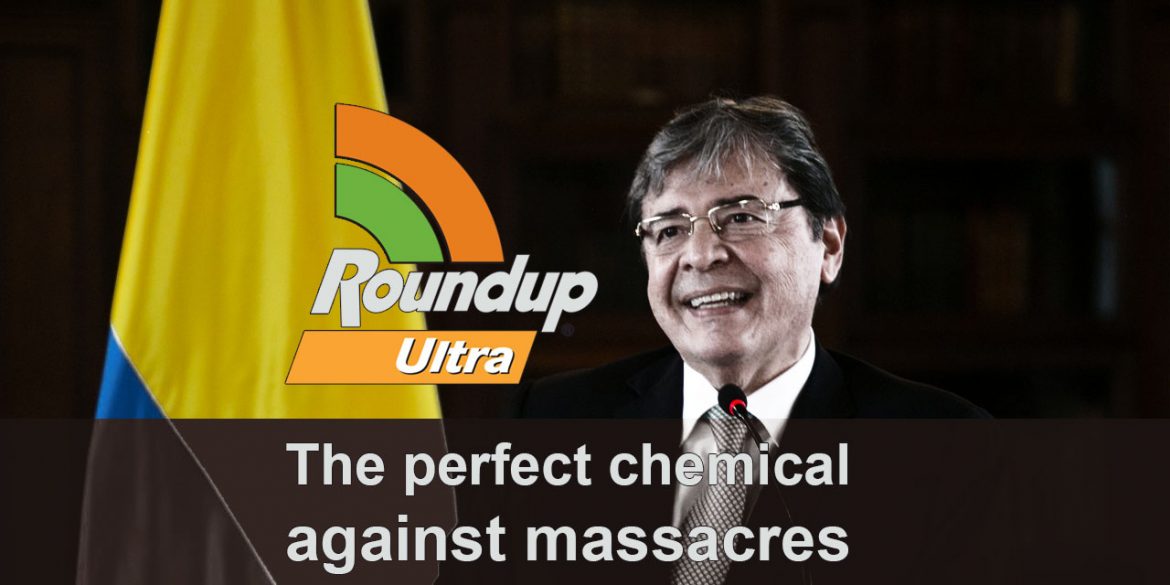 Colombia’s defense minister on Saturday used a massacre to promote herbicide glyphosate as a solution to increased violence and armed conflict.

In a press conference, controversial Defense Minister Carlos Holmes Trujillo claimed that the country’s 81st massacre this year is due to “that damn drug trafficking.”

The alleged “disaster” of a minister went on to promote glyphosate as if the the notoriously ineffective aerial spraying of coca would improve public security.

President Ivan Duque is under increasing pressure for failing to comply with a 2016 peace deal with demobilized FARC guerrillas that would allow the dismantling of paramilitary groups.

The groups once promoted by Duque’s political patron, former President Alvaro Uribe, are suspected of carrying out many of the massacres that are terrorizing Colombia.

Uribe and his far-right Democratic Center party oppose the peace process, however, and Duque and Trujillo try to blame increased violence and armed conflict exclusively on drug trafficking.

Additionally, the president and his defense minister falsely claim to be implementing the peace deal that includes counternarcotics strategies they have all but abandoned.

The government appears to be bungling both the peace process and counternarcotics efforts as parts of the country’s historically neglected countryside descends into violent chaos.

The country’s largest peace movement, Defendamos la Paz, has urged the international community to increase pressure on Duque to implement the peace deal.

Doing so, however, could destroy Duque’s party that is closely linked to organized crime and could severely damage the military, which is blamed for countless human rights violations and accused of having ties to the paramilitaries.

The FARC’s demobilization in 2017 has made it impossible to blame the former guerrillas for every crime and human rights violation. Instead, the defense minister tries to blame drug trafficking.